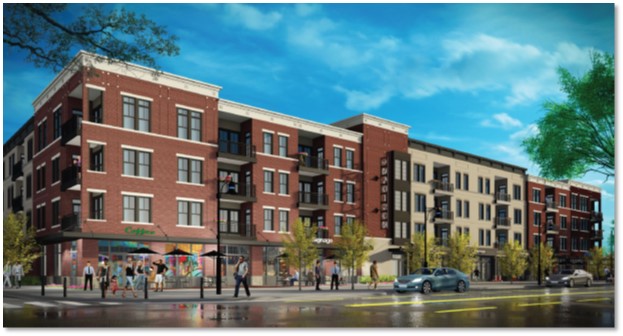 A years-long vision for Greenwood’s future city center is starting to come to fruition.

Luxury apartments, condos, townhomes, retail and a large parking garage will soon sit on the site of the former Greenwood Middle School, between Madison Avenue and Meridian Street in the heart of downtown.

The $83 million development, which will take about 2 1/2 years to complete, will be part of a public-private partnership between the city and developers that includes millions in taxpayer-funded incentives and investments by the city.

The development will include seven buildings with nearly 300 market-rate apartments, more than 15 condos and more than 40 townhomes, along with 18,000 square feet of office and retail space on the first floors of the buildings. The condos and townhomes will likely start at about $300,000, though specific prices have not been determined. It is unclear how much the apartments will cost to rent as it will depend on the market at the time.

A 36,000-square-foot, three-story parking garage with more than 500 spots will also be built on the properties. Additional surface parking and garages attached to apartment buildings will bring the total parking spots to 992, with some set aside for residents and others for the public visiting the downtown area for dining and shopping, and for recreation at nearby parks and the soon-to-be fieldhouse.

The project is being developed by Carmel-based CRG Residential and South Bend-based Great Lakes Capital. Both have a history of developing mixed-use spaces through public-private partnerships in several cities in Indiana, including nearby Brownsburg, Fishers and Westfield, as well as Elkhart and Evansville.

The project was unveiled Thursday at a special Greenwood Redevelopment Commission meeting, where members unanimously approved the project agreement between the city and developers, pending legal review.

Greenwood Mayor Mark Myers said Thursday the project is one of the most “exciting things to happen to the city for many years to come.”

A large investment for Greenwood

The City of Greenwood will invest $15 million in the project for the parking garage, which will be controlled by the city, stormwater and street improvements, including continuing the Madison Avenue streetscape project and adding two new city streets.

Those funds will come from the central tax-increment finance, or TIF, district, through a bond anticipation note, which means the city does not have to withdraw the entire TIF bond at once, but will instead take out money as it is needed. Doing it that way is a safety net for the city’s finances in case the project falls short or falls through, said Adam Stone, a financial consultant for the city.

“We want to protect the public investment,” Stone said. “If the project never gets off the ground, there is no draw of those bonds.”

Also from the central TIF, Greenwood will give a $12.8 million economic development bond to the developers, a form of incentive in place of giving the developer a large tax break for the project.

Giving the bond to the developer takes the risk off the city, Stone said. If the project falls apart, the bond will be forgiven and the city will not lose anything. The practice is commonly used in cities, including Fishers and Indianapolis, for economic development purposes, he said.

A similar deal was given to The Garrett Company in 2019 to build luxury apartments near County Line Road and Emerson Avenue.

The assessed value of the central TIF district is $66.5 million. The city will recapture its investment over time, as the development is expected to bring in more than $1 million in annual tax revenue once it is completed, and add $20 million to the TIF’s base value over time, Stone said.

The developers plan to invest $68 million in the project, including buying about 19 acres of land from the city for a total of $1 million, split evenly into two phases. The City of Greenwood purchased the former middle school property for $1.1 million in 2017.

The second phase of the development, which is just one of the seven buildings that would have condos and retail space, is contingent on CRG and Great Lakes Capital finding enough buyers interested to fill at least half of the space. If that does not happen, phase two would be scrapped.

The idea for the former middle school property to eventually become the center of downtown Greenwood began several years ago.

The central TIF district was created in 2013 with the intention to use it to fund the redevelopment of Old Town Greenwood. Over the years, every project in the area — from redoing the Madison Avenue streetscape to the $5 million revamp of Old City Park — led to this $83 million development.

Construction continues on the Greenwood Fieldhouse that will anchor the development. Inside the school’s former gymnasium, the facility will include an elevated indoor running and walking track, two turf fields, basketball and volleyball courts and indoor pickle ball courts.

Greenwood also created a riverfront district last year to allow for more bars and restaurants to acquire liquor licenses, with the intention of attracting more dining and retail in the future.

“In the long run, yes, it was intentional,” Myers said. “We knew that further development was coming.”

Though there are few details about what exactly the inside of the new apartment and retail complexes will look like, Myers hopes to bring a larger mix of dining and shopping options to the city, he said. He wants to see a high-end steak house, a nice breakfast and lunch spot and more microbreweries in the area, he said.

Assessed risks and what’s next

As the coronavirus pandemic continues, there was some concern about how well the properties will do due to that.

But Myers said he is not worried about demand for the residential or retail spaces because residents have been looking forward to this development for years. Also, the complete build out of the property is not expected to be finished until 2023, hopefully long after the pandemic subsides, he said.

“We have had so many inquiries from people wanting to get on a list to be able to move into downtown,” Myers said. “It’s amazing to have the amount of people asking, ‘When is this going to be ready? Because I want to live in downtown Greenwood.’”

The city also addressed future traffic concerns by conducting a traffic study last year. The study concluded that the added development and residents will not negatively affect traffic flow along Madison Avenue, Meridian Street or Smith Valley Road, especially with the installation of the Madison and Smith Valley roundabout in 2018, Myers said.

Before construction can start, the Greenwood City Council will review both TIF bonds for the city and developers, which will likely happen this month, city officials said.

If approved, construction could begin as early as July 1 on the parking garage and two of the buildings. The entire project is expected to be completed by August 2023.

Indiana governor out of hospital after pneumonia treatment

Megan’s Fund in 17th year of helping kids at Christmas