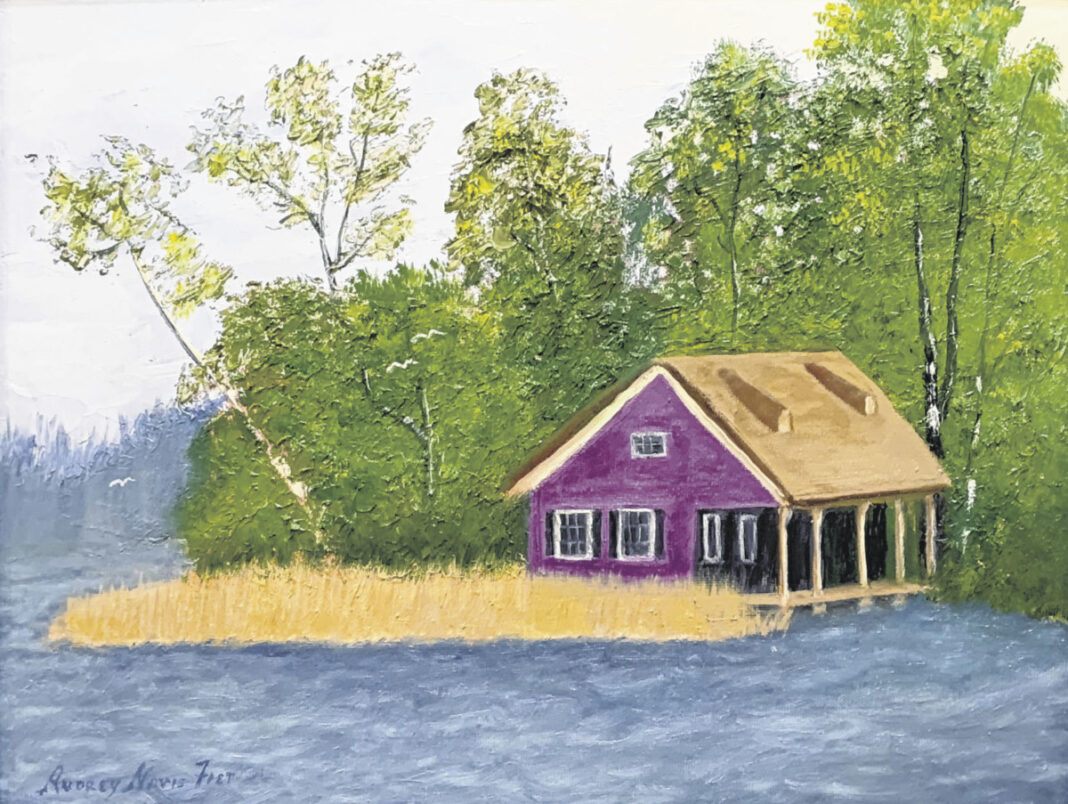 Striking images, shapes and colors leap from the walls.

Vivid colors blend with muted tones in the abstract wonder of Beverly Mathis’ “Zoobilation.” The gentle wonder of a child’s wonder is captured in “Emma,” a graphite work by Becky Brodhacker.

Energy radiates off of the hypercolor ridges and rippling fronds rendered in oil paint in Gary M. Jursik’s “Tropical Banana.”

The many members of the Southside Art League all bring different levels of skill and ability to the Greenwood-based creative organization. But as is clear in their annual membership show, none are lacking for talent.

“It’s a really diverse show. We have a little bit of everything,” said Barbara Dunn-Stear, Southside Art League member and co-chair of the show. “I was really in love with this show because of the variety.”

The wondrous works of the art league are now on display at the Greenwood Public Library, as the Southside Art League takes advantage of an opportunity to present their work to the community as a whole. From vibrant oil paintings to stunning photographs to lifelike ceramics, the membership show features the best work by local artists.

People are invited to come to the library through Oct. 23 to see the creativity incubating in the county. At the same time, they’ll have the chance to vote on which works they think are best.

“We’re looking forward to what the public thinks of all of those outstanding artwork,” Dunn-Stear said.

For 29 years, the Southside Art League has been hosting its annual membership competition and show as a way for those in the organization to showcase their new work.

The event is something that Southside Art League members look forward to every year, Dunn-Stear said.

“You can tell in the classes that I take there, that when the membership dates are announced, there is some excitement about what they have and what they can do that would be a good entry,” she said.

At the same time, knowing that the organization has a competition that comes around every year pushes people to expand their creativity and shoot for the prizes.

“It encourages people to hone their craft, to keep working on their skills,” Dunn-Stear said. “We all kind of need that encouragement in a gentle way.”

Entrants are separated into professional and non-professional divisions, and include submissions in oil painting, acrylic, watercolor, mixed media, pastel, photography and 3D works.

“This year, we were just really thrilled that we could have a show, after not being able to do one last year,” said Ellen Tuttle, a Southside Art League member and co-chair of the show.

Awards for the show have already been given, with Jursik taking Best of Show. Mathis’ swirling abstract mixed water media and collage piece “Zoobilation” was given first prize in the professional division, while Brodhacker’s sweet graphite piece “Emma” was first prize for non-professionals.

But one more prize is yet to be given. New to the competition this year is a People’s Choice award. People who come to the library will be able to pick their favorites, and voting will last through the run of the show, until Oct. 23. The winner will receive a small cash award and a ribbon.

Throughout the year, work by Southside Art League artists are on display at the organization’s Off Broadway Gallery. But the gallery has limited hours and is kind of a hidden gem in the Greenwood area, Dunn-Stear said.

Having the show at the library offers a wide reach for art lovers and potential buyers.

“We wouldn’t get the amount of traffic in our gallery,” Dunn-Stear said. “It’s really nice for the artists to have a public view. We’ve sold some paintings from that show, so that’s always good.”

Lori Borgman: The Boston Tea Party you never read about in books

Hop to it: Kangaroos jump into the Indianapolis Zoo