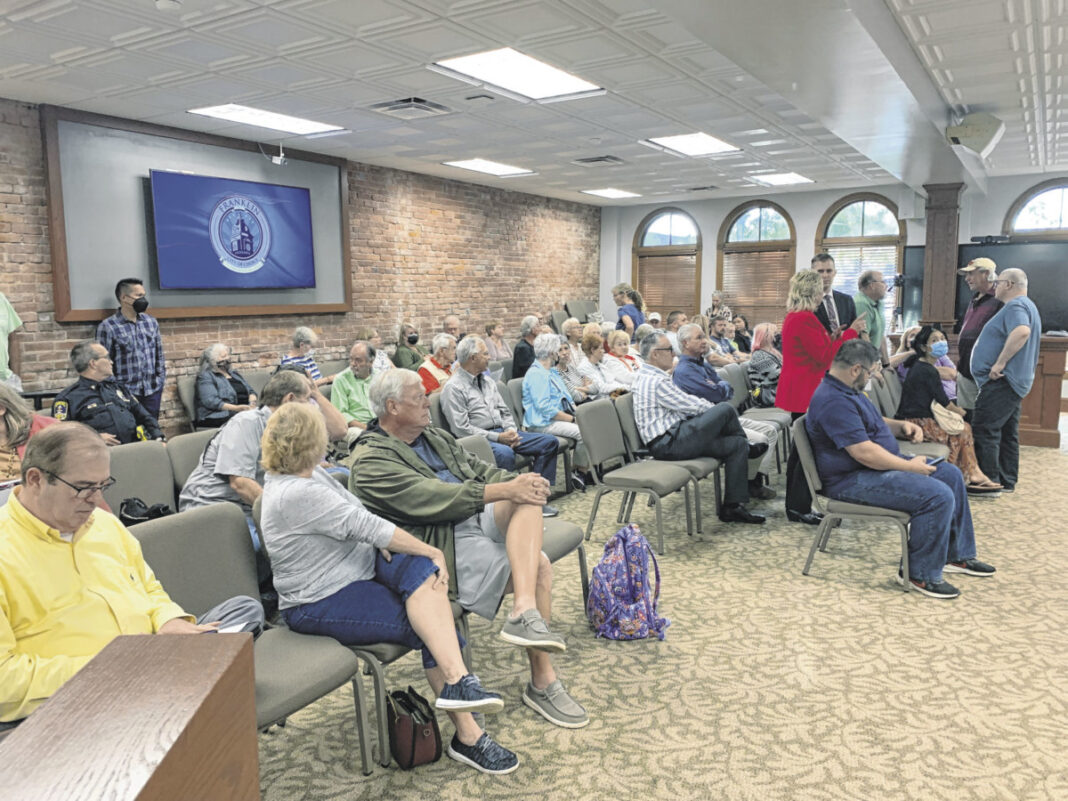 More than 300 homes will be built on a 130-acre property near The Legends Golf Club.

The Franklin City Council was divided on the development from Forestar Group Inc., an Arlington, Texas-based residential developer. The council on Monday voted 4-3 to approve the company’s request to annex and rezone 130 acres north of the Heritage subdivision on the northside of the city.

The rezoning is from two different classifications of residential zoning with commitments. The two classifications were used to blend the neighborhood with surrounding homes, said Melissa Garrard, of the Forestar Group. The northside of the subdivision, dubbed The Highlands, will be zoned R-2, to accommodate estate-sized homes from $330,000 to more than $400,000, while the southside of the subdivision will be zoned R-3 to accommodate homes from $285,000 to $336,000, which are similar to homes found in Heritage.

Previously, the site plan included 347 homes and no neighborhood amenities, but the developer introduced a new site plan that replaced 25 homes with a pool, pool house, parking area, putting green, fire pits and a large green space at the entrance to the community off Hurricane Road.

The location and size of the development and quality of the homes gave three council members pause, which resulted in both the annexation and rezoning proposals receiving split votes. Council members Bob Heuchan, Anne McGuinness and Shawn Taylor voted no.

Before those votes, the council first reconsidered a fiscal plan for the annexation, which had been shot down at its Sept. 7 meeting. The fiscal plan, which purely outlines that the city can provide utilities and public safety to the area, passed 5-2, with Heuchan and McGuinness voting no.

Though the development was not up for a public hearing during Monday night’s meeting, one neighbor of the development, Linda Norton, was invited to speak briefly about a petition to “keep Franklin small.” The petition, which encourages city officials to push back against further development, gathered 647 signatures. Other petitions circulating among residents of Heritage and Heather Glenn urged the council to vote no on the proposal. Those received about 170 signatures combined, she said.

Neighbors previously stated their opposition to the proposed development at public hearings of the council and plan commission. They cited concerns about the value of the homes and quality of materials when compared to nearby large-lot estate homes. Representatives from The Legends also shared concerns about drainage and worried it could cause flooding at the golf course.

The three council members who voted against the development had different reasons. The four members who voted in favor — and Mayor Steve Barnett — centered their arguments around the need for more housing in Franklin.

Council members Lisa Jones and Ken Austin both said the housing shortage in Franklin was the reason they are in favor of the development.

Barnett said the housing shortage has stunted the city’s growth in the past 10 years, despite revitalizing downtown and adding countless retail, restaurant and industrial jobs.

Right now, there are 87 lots available for new homes, and 654 lots with an active building permit, according to data from the city. In the coming years, 818 new homes will be built across subdivisions that are already approved for construction. With this development, that number climbs to 1,140, data shows.

“When you see ‘help wanted’ signs everywhere, it’s easy to say the extra unemployment pay is the reason, but that is not the whole picture,” Barnett said. “The fact is, we are not retaining our talent; our young adults are graduating and moving away. One of the main reasons for this is they can’t find places where they can live. We need to not only attract talent, but strive to keep our local talent. In addition, quality, affordable housing in safe neighborhoods is needed for both young and old alike.”

Jones visited DR Horton subdivisions in Bargersville, Whiteland and White River Township, and said they seem to be high quality, despite some bad reviews on the internet from homeowners in other states.

“We have a very high shortage of homes here,” Jones said. “I have two kids who tried to purchase a home here but couldn’t because there was nothing available for them to purchase. They tried making offers on one house that was in Camelot, and there were 10 offers on that same house. I think we all have stories like that.”

Taylor also visited DR Horton subdivisions but came to the opposite conclusion. The visit made him question whether the development was a good fit for the area. He did not like how the neighborhood in Whiteland was largely covered in siding, rather than majority brick. That is not a good look for the future gateway into the city, he said.

Both Taylor and McGuinness, who live near the development, were concerned about the amount of activity that would come to Hurricane Road from the development and a hoped-for Interstate 65 interchange at Earlywood Drive.

McGuinness urged the council to consider the feelings of nearby residents and whether this kind of development is the best use for that property.

“These people know best. They bought their homes for a reason. I know a lot of the faces sitting out here and they’ve been long-time Franklin residents,” McGuinness said. “I am not against growth. I’m not against this company coming in, per se. But I just think it is the wrong location. It is too much next to Heritage on Hurricane. And if there is a planned interchange coming, wow, what an explosion. That’s why I can’t support it.”

Similarly, Heuchan asked the council to hit pause and consider whether they know what residents want and whether this and future developments fit that bill.

“Can’t we just figure out a way for all of us to decide what we want to do, whether you are voters or not voters, whether you live on the outskirts of the town or right in downtown,” he said. “I’m not being inundated by people who are coming to me and saying, ‘I want industrial development’ or ‘I want housing subdivisions popping up everywhere.’ I think we need growth and I’ve always been an advocate for growth, but it has to be responsible growth.”

The approval included a list of commitments, including anti-monotony and a promise to build and complete the community amenities during the first phase of construction.