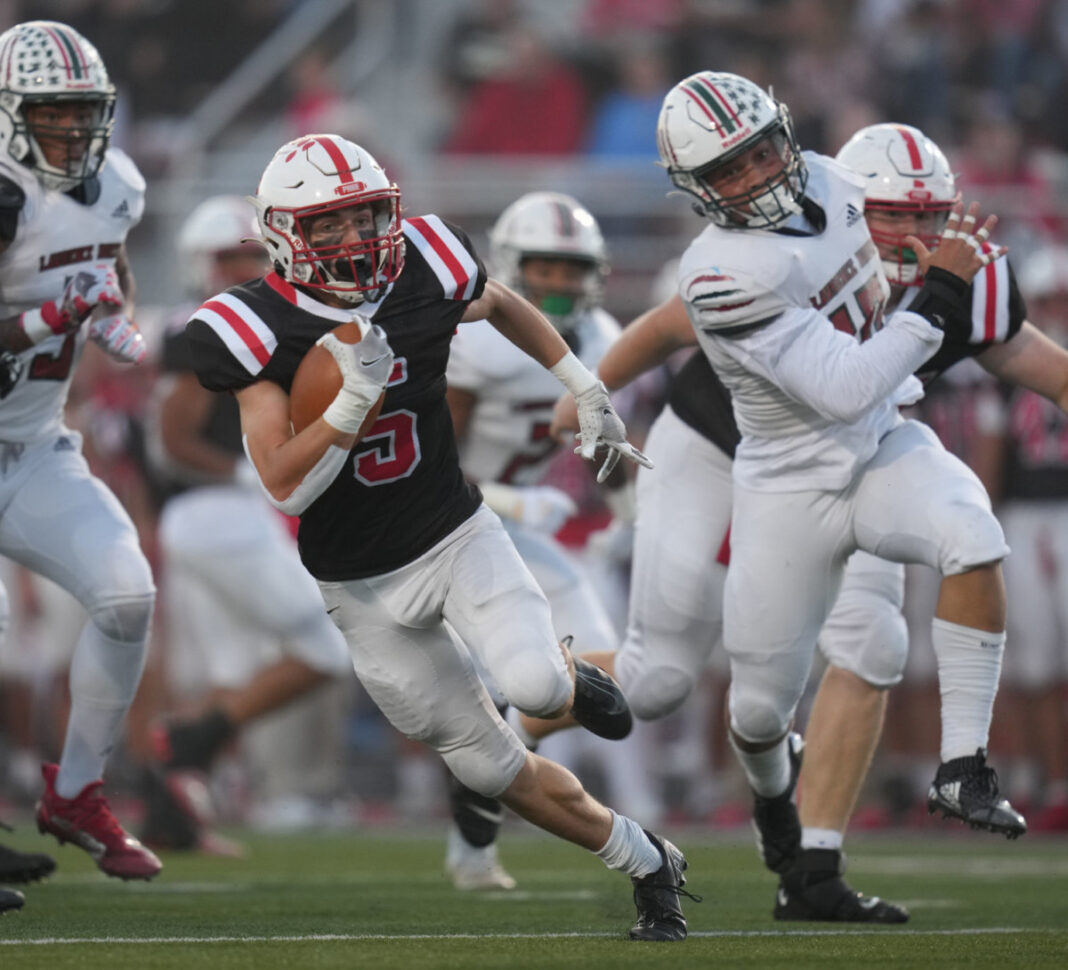 Tayven Jackson has never really put up eye-popping passing numbers, but that’s generally been a product of him never really needing to.

The Center Grove quarterback proved on Friday night that he’s perfectly capable of doing so when the opportunity presents itself.

Jackson threw for a career-high five touchdowns and completed all but one of his pass attempts, leading the Class 6A No. 1 Trojans to a comfortable 43-19 rout of No. 7 Lawrence North.

“We just took what the defense gave us,” said Jackson, who completed 10 of 11 tosses for 179 yards. “Our guys did a great job of getting open. This is all the receivers and the O-line; I’m just back there throwing the ball.”

Center Grove (8-0, 7-0 MIC) needed less than a minute to cash in on its opening drive, going 76 yards in just three plays. After a 39-yard keeper by Jackson moved the ball into Wildcat territory, Drew Wheat cut his way through a seam in the defense and got loose for a 32-yard scoring run. Caden Curry tacked on a two-point run, and the Trojans were off and running.

Lawrence North (5-2, 4-2) went three and out on its first possession, and Center Grove again needed just three plays to find the end zone. This time, Jackson dumped the ball off to Daniel Weems, who dashed 45 yards untouched up the right sideline. Less than three minutes in, the Trojans had a 15-0 cushion.

An Ethan Watt interception on Montez Jones’ third-down throw over the top to Omar Cooper kept the visitors off the scoreboard on their first venture across midfield, but the second attempt bore fruit. Scrambling on another third and long, Jones found a wide-open David Ragas for what turned into a 72-yard pass play to the Trojans’ 3. Ali Richardson plunged in on the next snap to briefly climb back within nine.

That, however, was as close as the Wildcats got. Jackson connected with Harrison Stomps over the middle on a 22-yard scoring pass, and immediately after Mitchell Evans recovered a fumble at the Lawrence North 27, Wheat pulled in a Jackson screen pass and darted in to stretch the Center Grove lead to 29-6 with 9:24 remaining in the half.

The Trojans tacked on one more score before the break, covering 83 yards in just 52 seconds. Jackson completed all five of his passes on the drive, the last one a 24-yarder to Noah Coy with 57.3 seconds on the clock.

Lawrence North then fumbled away the second-half kickoff, and Jackson secured a running clock shortly thereafter when he hit tight end Shane Bennett in stride for a 14-yard touchdown. The Wildcats were able to get in the end zone twice against the Trojans’ second unit early in the fourth quarter, with Jones scoring on runs of 6 and 9 yards. The second TD came on the final play of the game.

The victory completed a second straight unbeaten run through the MIC for Center Grove — something that no other school has accomplished in the league’s 26-year history. Next comes a matchup with Class 5A No. 1 Cathedral, which is essentially a postseason tuneup with a lot of hype and bragging rights attached to it.

“Next week’s just a pride game,” Trojans coach Eric Moore said. “It doesn’t have anything to do with the tournament … but we want to win. We want to continue what we’ve been doing.”

Green, Newlin look forward to being part of South all-stars