Home Local News Volunteers from all over helping refugees locally 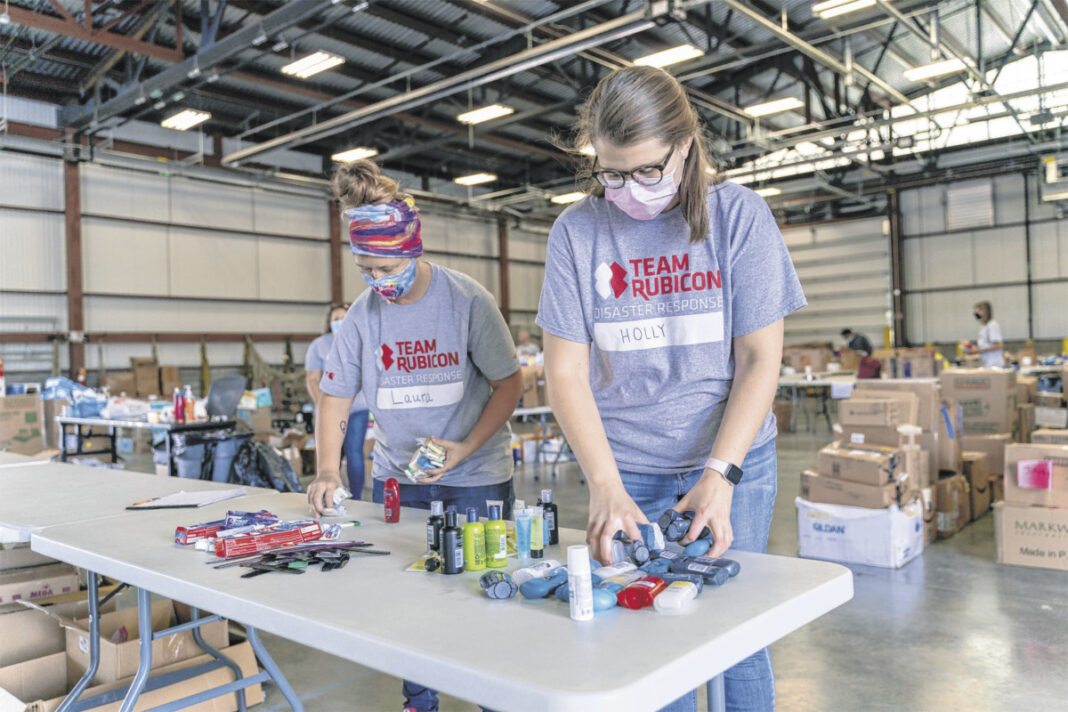 A veteran-led organization was tapped to help resettle Afghan refugees, including those being housed temporarily at Camp Atterbury.

Team Rubicon volunteers from all over the country were sent out to seven bases in six states to help the refugees resettle. In Indiana, about 500 volunteers are registered to give back, and about 30 volunteers a day help collect and sort donations for refugees at the southern Johnson County base, Team Rubicon representatives said.

Volunteers take donations seven days a week at the Johnson County Park Amphitheater, then sort and repackage them at a nearby warehouse to distribute at the base, they said.

The work of collecting donations is a critical component of the mission, as the refugees picked up and left their entire lives behind in their homeland after the Taliban regained control of the country. They brought with them few, if any, possessions, and are starting over with just the clothes on their backs.

Team Rubicon volunteers were attracted to the mission to help those who helped the United States’ mission in Afghanistan. Locals are helping, but many traveled to Johnson County to help out.

“When I saw Team Rubicon was doing this mission, I wanted to participate whenever and wherever I could,” said Rusty Hessler, a volunteer from Ohio.

No matter which war they served in or whether they were on active duty, veterans who are serving feel connected to the mission, they said.

“I feel I have a personal obligation to the overall war. Since I have the ability to help, that gives me the responsibility to do so,” said Tyler Smith, a volunteer who served five tours of duty in Iraq.

Giving back together keeps the spirit of teamwork and helping their fellow man alive, they said.

“For me, what I enjoy most is giving back in camaraderie with other veterans. The main thing we learn in the military is the importance of teamwork,” said Tom Powell, a volunteer. “I’ve really enjoyed the teamwork aspects of Team Rubicon while we are accomplishing our mission.”

In the weeks since the Johnson County donation site was set up, more than 700,000 donations have been processed for the roughly 6,600 refugees at the base. Donations have ranged from clothes and baby items, to toys and hygiene products, to help evacuees of all ages restart their lives in a new place.

With cooler temperatures approaching, the most needed items right now are cold-weather clothes, hats, scarves, gloves, coats and shoes for all ages. Children’s sizes and adult small- and medium-size clothes are the most needed.

With at least eight babies born since the refugees arrived, more baby formula and diapers are another ongoing need.

Donations can be dropped off at the amphitheater, or donors can buy items from Team Rubicon’s Amazon.com wish list and have the items shipped directly to the warehouse. A link to the list is available at teamrubiconusa.org/resettlement.

Team Rubicon, formed in 2010 to respond to a catastrophic earthquake in Haiti, is providing support for refugees while continuing to help out in multiple ways across the country. Recently, the organization responded to Hurricane Ida, a flooding event in Tennessee, and provided medical help to the Navajo Nation.

Johnson County Recycling District: 900 Arvin Drive, Franklin. The Franklin Recycling Center is open for drop-offs from 8 a.m. to 4:30 p.m. Tuesday though Friday and 8 a.m. to 12:30 p.m. on the second and fourth Saturdays of the month.

Trafalgar Christian Church: 300 West Pearl Street, Trafalgar. Those interested in dropping off donations should call or text Pastor Kyrmen Rea ahead of time at 317-408-9782.

Union Christian Church: 1331 East 300 South, Franklin. Those interested in dropping off donations should call Rev. Mark Parkinson ahead of time at 765-744-9772.

Wild Geese Bookshop: 107 South Water Street, Franklin. The store is open from 10 a.m. to 6 p.m. Monday through Saturday, and 12-4 p.m. on Sundays. Wild Geese will collect at this location until Sunday and will resume collecting at their new store at 40 East Madison St. on Oct. 1.