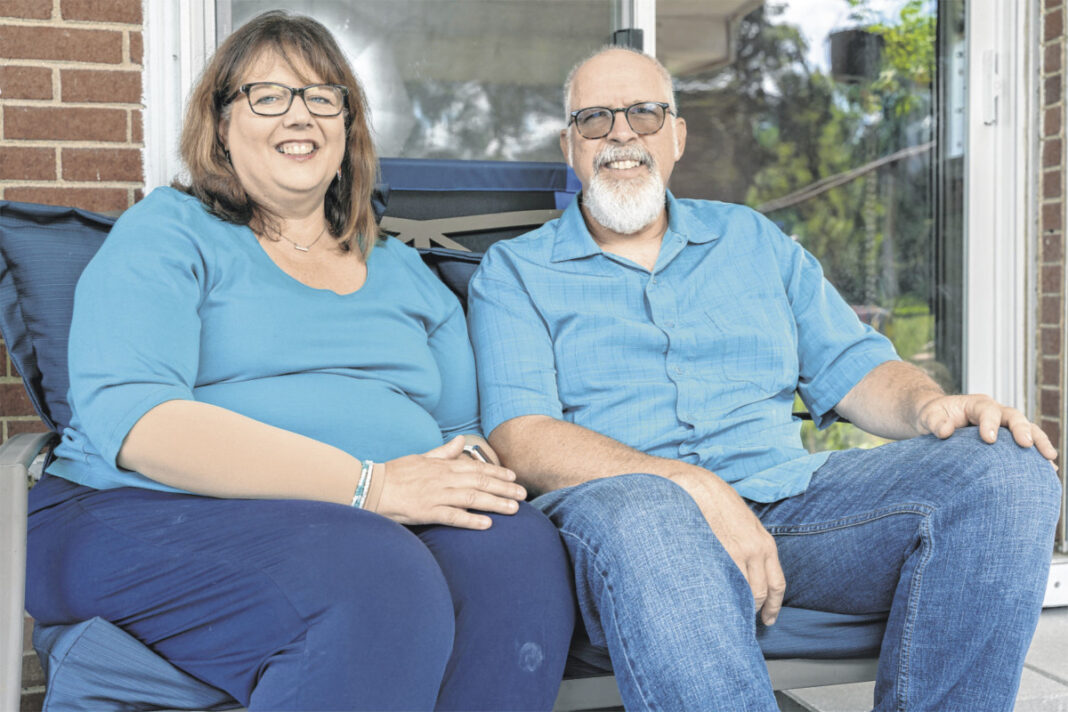 She had no plans of slowing down.

When Laura Lemons was first diagnosed in 2013 with Stage 3 cervical cancer, she did her best to continue with her routines. She dressed up every day; she went to work. But she quickly discovered just how much cancer can take out of you.

Lemons was at the beginning of what has been an eight-year health battle. She’s defeated breast and cervical cancer, and a chronic condition called lymphedema, which causes swelling in the limbs and can result in hospitalization or death if left untreated.

She was 46 and busy with life, work, sending her daughter off to college and caring for another kid who was still in high school. She had a lot going on and overlooked getting a gynaecological exam. She confused the recommendation to get a pap smear every one to three years with the recommendation to have an annual gynaecological exam. She went three years without one. When she finally got one, she was diagnosed with Stage 3B cervical cancer.

Stage 3B means the cervical cancer has spread to the pelvic wall, the tumor has grown enough to block one or both tunnels that connect the bladder to the kidneys, or it has caused one or both kidneys to stop working or get bigger, according to the National Cancer Institute.

The diagnosis was a complete surprise, Lemons said.

“I was an extremely healthy person. I hadn’t missed work ever, maybe a day here and there, but I was a very healthy person. This came out of left field,” she said. “I’m an independent person, I’m not used to accepting help. But one of the first things I had to realize going through the diagnosis like that, I was going to have to accept help.”

Lemons had a support system. In fact, it was her loved ones who ended up telling her about her diagnosis, said Jim Lemons, her husband.

“Nobody really knows (what it’s like) until they see somebody, especially a loved one, go through this,” he said. “Cervical cancer was the first cancer she had. It was diagnosed and they told us what it was. It was a large tumor they had found and she was going to have to get a lateral hysterectomy. The doctors had us break it to her. Her mom and sister and I ended up telling her what was going on. As soon as you hear ‘cancer,’ your brain locks up. I said, ‘we’re going to hit this. We’re going to do it. We’re going to come out fine.’ She had her mind set we’re going to hit it straight on and do everything we can do to get through this.”

For four months, Laura Lemons fought for her life. Chemotherapy and radiation happened constantly and often simultaneously. Lemons had to take an extended break from her job at Eli Lilly as the treatments affected her brain, she said.

“You just have to go into survivor mode and do what you need to survive,” Laura Lemons said. “It’s almost like going into isolation to some degree. With cervical cancer treatments, you have radiation and chemo at the same time. It’s extremely debilitating and you quickly develop chemo brain. You start having difficulty remembering things. I got to the point where I couldn’t read a book or put puzzles together. My body was just fighting to stay alive at that point.”

Those four months were also difficult for her husband, who took care of her, Jim Lemons said.

“Sitting there watching her go through it and have these really strong drugs pumped into her was very difficult,” he said. “We had to designate a single bathroom for her. I couldn’t use the same restroom because the stuff going through her was so toxic. Every day I would have to pull the sheets off and wash them and wear gloves. … I couldn’t believe what was running through her body.”

The cost of the treatments added stress. Even with a good health insurance plan, her treatment ended up costing the family $60,000, Jim Lemons said.

Eventually, there was light at the end of the tunnel, Laura Lemons said.

“It was four months of real hard work and I got through it,” she said. “I started rebuilding my life one step at a time, literally.”

It started with walking without assistance. After the treatments ended, her sister took her on vacation to ride horses. For a while, it seemed like her cancer battle might be over.

“When I got cervical (cancer), I said, ‘OK, that was my cancer.’ I got breast cancer and was really mad about it,” she said. “I think it was like, I already went through this, why didn’t chemo and radiation kill this too?’”

Unlike with cervical cancer, she was able to continue working and doing daily activities, as chemo and radiation treatments were more spread out, she said.

“During breast cancer, I had two daughters in college,” Laura Lemons said. “I saw my younger daughter graduate high school and go to prom. This time, I kept focusing on wanting to see my daughters graduate college, to attend my parents’ 50th wedding anniversary. Things like that motivate you and keep you going through treatments.”

In 1997, Anita Sipe, Laura Lemons’ mother, was diagnosed with Stage 3C breast cancer. Through her faith, positive attitude and excellent team of doctors, she was able to make it through, she said.

But when her daughter got diagnosed, it felt different, she said.

“It was scarier for me when she was sick — I couldn’t control that,” Sipe said.

Sipe was able to recommend an oncologist who had helped her overcome the disease, she said.

“When she found out she had breast cancer, they gave her a couple names. One was Dr. Thomas Schmidt. I trusted him. That’s the one I had,” Sipe said.

Through her cancer journeys, she learned to appreciate the little things in life, she said.

“I used to be uptight, but things don’t get to me as much. I think I’m a kinder person,” Lemons said. “I’m a little bit happier in general because I just don’t let those things get to me. I’m more empathetic than before. Anytime you go through a life-altering event it changes you. In my case, it changed me for the better.”

Though she survived cancer, it left her with a lifelong condition: lymphedema.

The condition is common among cancer patients and survivors. It causes swelling in the arms or legs, and is often caused by lymph nodes being removed or damaged by cancer treatments, according to the Mayo Clinic.

Lemons, now 53, has to wear compression clothes to stop the swelling in her legs, and undergoes lymphatic massages for lymphatic drainage, she said.

“There’s no cure, no way to fix it. It becomes a chronic illness. Because I wear my compression clothes, (they) allow me to keep active and moving on with my life,” Lemons said.

After breast cancer, she also developed lymphedema in her arms.

“Now I have it in all four limbs,” Lemons said. “I’m very susceptible to cellulitis, which is an infection underneath the top layer of your skin that can be very serious. I have to be extremely careful for any kind of skin infection. My immune system is compromised. I have fatigue, pain and just some overall limitations — mobility-type limitations.”

She has been living with lymphedema since 2014, a year after her cervical cancer diagnosis. She found support groups, like Lymphie Strong, and connected with some of the 3 to 5 million American patients who have the condition, she said.

Along with support groups is the Lymphedema Advocacy Group, which aims to get compression garments covered under Medicare so everyone who needs them can get them, said Cindy Cronick, Indiana team anchor and board member for the group.

“Medicare doesn’t cover them because there’s no existing benefit category in Medicare law,” Cronick said. “If you cover them under durable medical equipment, it doesn’t cover the definition because the garments need to be replaced after six months. Things that last years are considered durable medical equipment. Things used once and disposed of are covered. This garment doesn’t fit into that category. There’s an unintentional coverage gap.”

Cronick survived her own battle with breast cancer in 2007, and has had lymphedema since 2011, she said.

Compression garments can cost anywhere from $81 for a standard arm sleeve to $960 for custom leg garments, she said.

“Patients, when they can’t afford the garments, their lymphedema progresses and they have recurrent infection, degradation of their condition and sometimes disability and death, all because they can’t maintain their condition,” Cronick said.

By ridding Medicare of hospital costs for unaffordable conditions, the Lymphedema Treatment Act would save Medicare $1.3 billion to $1.5 billion in the first 10 years, because by covering the costs of compression garments, the medical costs of treating people for complications from lymphedema are averted, she said.

Once there is a vote on the act, it should get passed by congress, she said.

“Not many bills pass as a standalone. Generally a small bill like ours is looking for an appropriate package,” Cronick said. “There really isn’t any resistance, it’s just so hard to get anything done. There’s a lot of gridlock.”

Be sure to grab a copy of Thursday’s paper for more Brave Hearts stories, saluting the fighters, survivors and caregivers in the battle against cancer.