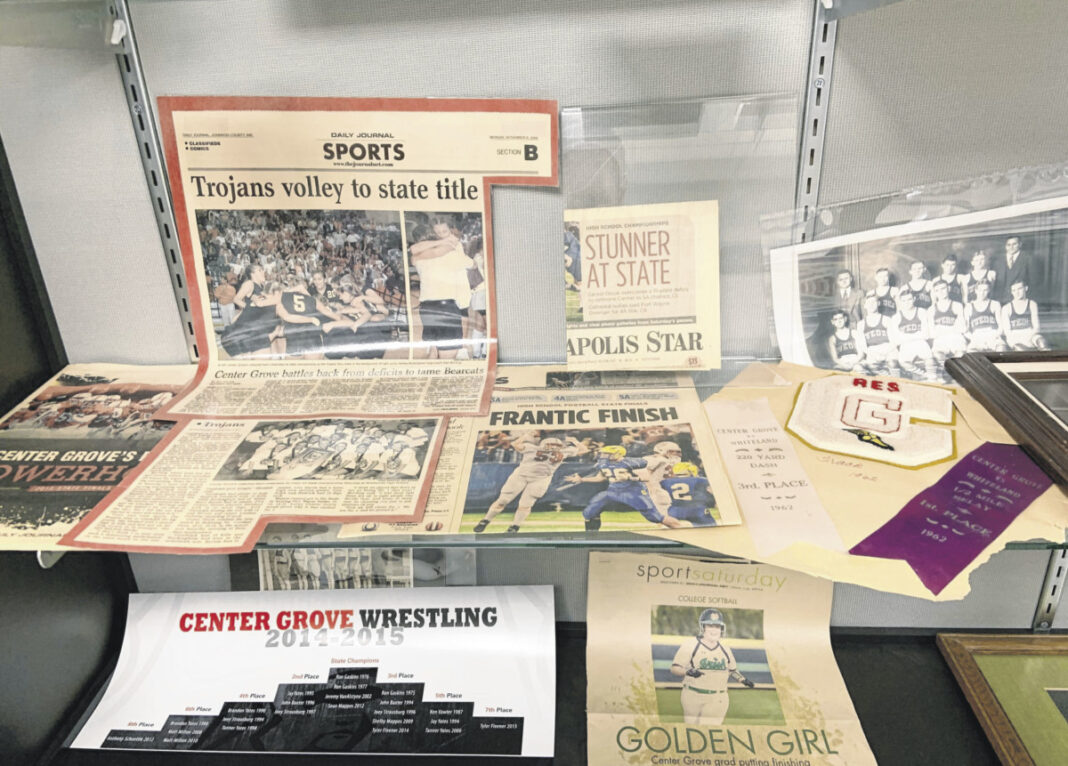 In the middle of the student rush at Center Grove High School, a treasure trove of school history sits waiting to be discovered.

Students may not always notice the items have been put on display. But for the alumni who brought them together, the exhibit is an opportunity for the current generation of Trojans to discover the tradition that came before them.

“It’s neat to be in the building and see the kids take a look at everything, and either giggle at something or say, ‘That’s really cool,'” said Jack Russell, a 1974 Center Grove graduate.

For more than a decade, Center Grove Alumni and Friends has been gathering pieces of school history for preservation. The organization expanded an archive system that started years ago, and is reaching out to the community to ensure that important pieces of history are not lost to time.

Not only do the efforts keep vital pieces of school history safe, but it gives current and future students a better understanding of their Trojan history and heritage.

“It’s good for today’s kids to see the history. It gives them more of an understanding of where this school came from; it’s not just a building they go to now and walk in and out of,” Russell said. “There’s a lot of history here we’d like them to understand.”

The archive kept at Center Grove High School was established by John Frank, a former history teacher at the school who has since retired. Frank gathered as many historical artifacts of the school as he could find, filing away each piece in a spare closet in the history hallway, organized by years and decades.

Center Grove Alumni and Friends helped carry on that mission in recent years. The organization is open to Center Grove alumni, current or former school board members, administrators, faculty or staff, and parents and grandparents of Center Grove High School graduates.

Founders wanted to create space for people who may not have graduated from Center Grove, but who have been important parts of the community, Russell said.

“We had families where, maybe the parents didn’t graduate from here, but because of their involvement with their kids, they were a big part of Center Grove,” he said.

The group’s efforts include special events such as the homecoming tailgate, scholarships to local students and honoring the oldest living alumni. The archive is an extension of that work — its mission is “honoring the past, supporting the present and preparing for the future.”

“In terms of honoring the past, preserving and being able to display and share items from the past,” said Jennifer Rakow, director of the Center Grove Education Foundation.

In the archives, they’ve collected yearbooks dating back to 1923, offering glimpses of the school buildings, school sports and activities, and individual students. People have given old report cards and sports programs. Banners from the former gym signifying Center Grove’s championships are included in the collection. Many people have given “senior cords.”

One family donated a rocking chair that had been a retirement gift for a former teacher.

“We’ve found some unique things over the years,” Russell said. “The archive has really helped us centralize where people are sending items and make it more organized so we can rotate things in and out of the displays.”

In recent years, Frank and alumni members focused on letting people know the archive exists and they want to keep collecting the items. As people are cleaning out closets, attics and basements, the alumni group wants to be sure they don’t just trash some of the historic pieces they might find.

“We’re just hoping that people don’t throw things away,” said Jeff Beck, a 1967 Center Grove graduate and historian who has helped collect items. “We’re open to about anything that people find.”