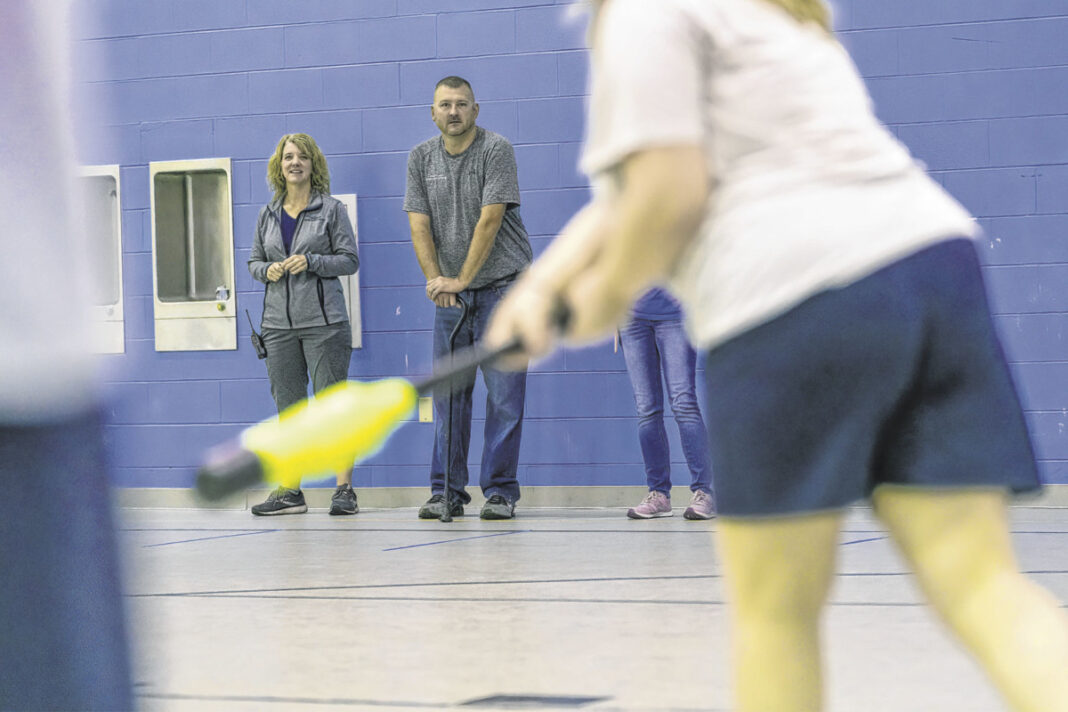 For nearly three decades, the county’s juvenile justice center has strived to provide a safe, secure and humane detention setting for young offenders, one that protects the community, but also respects the rights of those behind bars.

But that’s gotten a lot harder to do due to staffing shortages that have plagued nearly every industry.

At the Dickinson Juvenile Justice Center, 35 employees are responsible for, on average, 20 young offenders at a time. There should be 40 employees.

As of Oct. 4, the center has five job openings, all full-time. That is down from earlier this year, but in a place like this, any staffing shortage can make all the difference.

The offenders, or residents as Justice Center employees call them, range in age from 11 to 18 years old. They’re from Johnson and surrounding counties, and have committed crimes such ranging from marijuana possession to robbery.

Earlier this fall, officials came before the Johnson County Council to shuffle some money in the budget for upgrades to the the facility’s control room and video equipment, along with a new sink, said Kristi Bruther, director.

The justice center was having trouble retaining staff, particularly youth care workers, so the upgrades are intended to allow staff to keep a better eye on residents as they adjust to staffing shortages, said Bobbi Bryant, youth care supervisor.

Right now, there are 20 youth care workers at the center. Officials have tried several ways to increase interest in the open positions, including making the schedule more attractive, raising salaries slightly and renovating employee spaces.

Bruther sought feedback from staff about what worked best for them, since they were working more hours to cover the vacancies, said Brandi Foster Kirkendall, court administrator.

The county received a grant to remodel a space at the facility as a wellness and workout room. The room gives staff a place to decompress during their shifts and on breaks, she said.

“It’s a detention center, so it’s a little stressful to be there,” Kirkendall said.

The center detains high-risk juvenile offenders, but also low-risk offenders, who staff are tasked with getting into programs that can help rehabilitate them and lower their risk of reoffending, Kirkendall said.

“The hope is that (low-risk juveniles) are not staying and we can find an alternative to detaining them, which in turn means that the juveniles that are in there are the ones that really need to be in there,” she said.

The high-risk juveniles that remain at the facility most likely have committed more serious crimes. It takes a special kind of person to help them get on track, said Bobbi Bryant, youth care supervisor.

They often come from backgrounds that lacked structure, so staff try to help them, teaching them coping skills, such as deep breathing, and how to manage their emotions, Bryant said.

Staff have to remain calm when residents yell at them, and they have to know how to deescalate a situation. It’s not for everyone, Bryant said.

Employees often enter an environment where residents may be very angry and upset, which can especially effect someone with trauma in their past. Employees have to keep watch over the residents, and escort them to classes, court and the gym, she said.

“When (residents) get to the point where they’re so angry, they’re not thinking correctly and they make very poor decisions,” Bryant said.

The youth care manager positions are the toughest to fill. The position operates on a 3-2-2-3 schedule, which means an employee would work three days, be off for two days, then work two days, and be off again for three days. They work 12-hour shifts, and switch between day shift and night shift every six months. Finding applicants who are willing to work that type of schedule is difficult. The fact that the center is short-staffed amid the coronavirus pandemic is also a factor, she said.

“You’re coming in contact with individuals off the street. You don’t know where these people have been. They could be sick and that could be another thing. People might not want to expose themselves to (that),” Bryant said.

Employees have to be able to adapt, she said.

While the job can be challenging, it can also be rewarding, seeing residents change behaviors and improve their lives.

“The people that are here with us have their hearts in the right place and are trying to do good work,” she said.