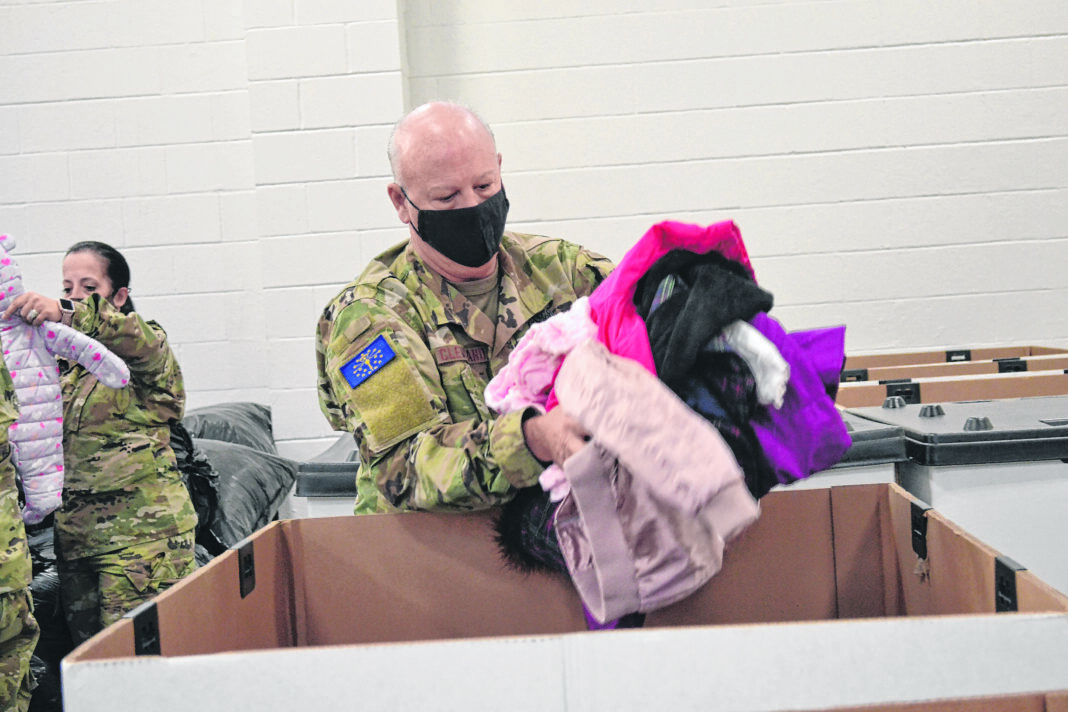 The Salvation Army collected 1,600 coats for Afghan refugees at Camp Atterbury, but with about 7,000 now at the base, there is still a donation gap.

State officials gathered Thursday morning with leaders from The Salvation Army’s Indiana Division at the Kessler-Moore Readiness Center, an Indiana National Guard facility in Indianapolis, to share an update on the refugees’ needs.

Afghans left their homeland quickly, most with only the summer clothes on their backs. Many didn’t have time to pack a bag while escaping for their safety, let alone a suitcase big enough for a winter coat. Now, with colder temperatures setting in, the refugees that are being temporarily housed at the southern Johnson County base are unprepared for an Indiana winter.

Donations are being gathered at local businesses and organizations around the state and at nine Indiana National Guard facilities.

The Indiana National Guard, Indiana Department of Homeland Security and Team Rubicon have connected refugees with more than 1 million donated items in the nearly two months since their arrival in early September, state officials said.

Now, Hoosiers are asked to donate winter clothes and shoes, as many of the refugees are likely to remain at Camp Atterbury for several more months, said Stephen Cox, executive director of Indiana Department of Homeland Security.

In addition, about 5,000 refugees are still waiting in Europe and the Middle East. Some of those people are likely to come to Camp Atterbury as those who are already here are resettled, said Brig. Gen. Dale Lyles, Indiana National Guard adjutant general. About 150 have resettled so far, he said.

With refugees cycling through the base on their journey to resettlement, the need for donations will be continuous, and donation sites will remain open as long as they are needed, Cox said.

The Salvation Army’s donation of more than 1,600 coats is a start, but thousands more are needed for the men, women, children and infants.

The Salvation Army gathered the coats as part of its annual Coats for Kids campaign. Last weekend, more than 3,000 coats were donated to local families in need, and the remaining coats will soon be on their way to Camp Atterbury, said Maj. Marc Johnson, divisional commander of The Salvation Army’s Indiana Division.

“We are giving 1,600 coats for our newest neighbors currently living at Camp Atterbury,” Johnson said. “We trust that this action will not only feel physically warm, but that they will understand and know how much Hoosiers care for the needs of their fellow human beings, regardless of where each of us were born.”

Both Cox and Lyles said they are proud of how Hoosiers have come together to support the resettlement process and meet emergent needs.

State employees and cabinet members, local governments and many donors have lent their support. Now, Hoosier families are called on to help out.

“There are about 7,000 evacuees there now, and 48% of that population is under the age of 14, so most everyone at Camp Atterbury is of a family,” Lyles said. “Those families are absolutely in need of these items. To be able to have these items, especially a coat, is vitally important to them right now.”

Helping U.S. allies is the goal of the mission, but soldiers are happy to help anyone in need, said Staff Sgt. Justin Bishop, a guardsman from Franklin. Bishop was one of about a dozen soldiers who helped sort coats donated by The Salvation Army on Thursday at the Kessler-Moore Readiness Center.

“It is not even so much about who it is,” Bishop said. “We want to help out anyone who is in need.”

Johnson County Recycling District: 900 Arvin Drive, Franklin. The Franklin Recycling Center is open for drop-offs from 8 a.m. to 4:30 p.m. Tuesday though Friday and 8 a.m. to 12:30 p.m. on the second and fourth Saturdays of the month.

Trafalgar Christian Church: 300 West Pearl Street, Trafalgar. Those interested in dropping off donations should call or text Pastor Kyrmen Rea ahead of time at 317-408-9782.

Union Christian Church: 1331 East 300 South, Franklin. Those interested in dropping off donations should call Rev. Mark Parkinson ahead of time at 765-744-9772.

Here is a look at current needs at Camp Atterbury:

Coats, hats, gloves and closed-toe shoes for all ages.

Children’s clothing in sizes newborn and up.