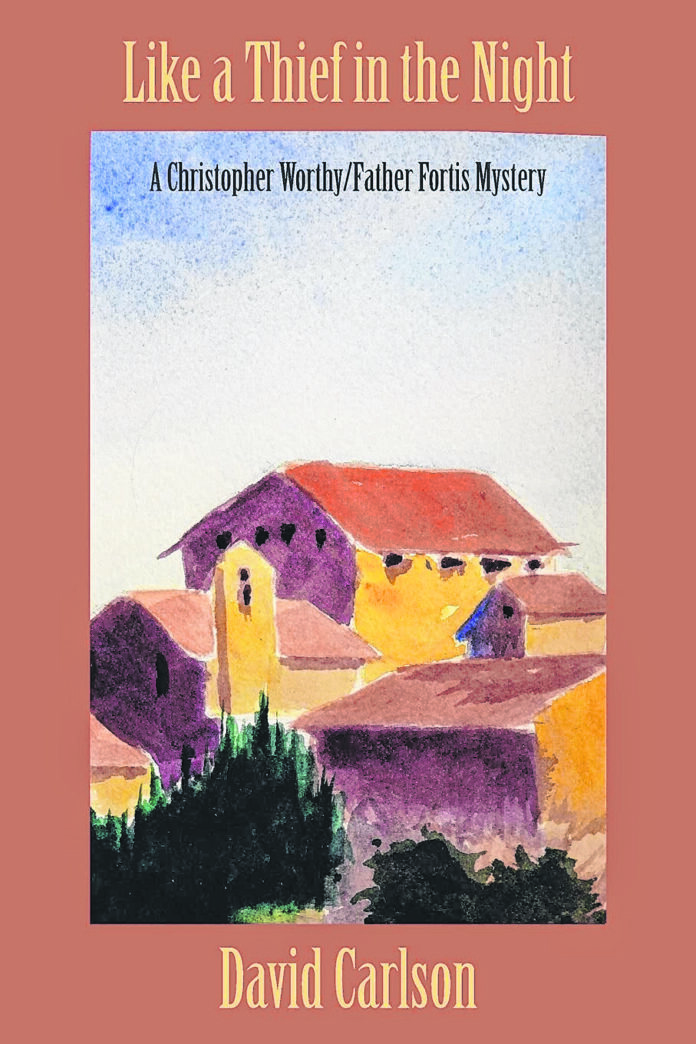 Over the course of six mystery novels, care had to be taken not to let the characters get stale.

David Carlson knew he had to walk a narrow path. The Franklin author had introduced his crime-fighting duo, Detroit detective Christopher Worthy and and Orthodox monk Father Nicholas Fortis, years ago. Over that time, they had established themselves in the hearts and minds of readers as they blended sleuthing with spiritual matters.

Still, Carlson wanted to see them grow. And in his most recent release, the impetus for that evolution is calamity some of the holiest sites in the world.

“In previous books in the series, they’re solving mysteries in monasteries and churches and places like that,” he said. “But in moving from Rome to Jerusalem, this allows them to move their talents to a much larger stage than I ever had them before.”

Detective Worthy and Father Fortis are back to solve their most grandiose and dire mystery yet. “Like a Thief in the Night” follows the pair from an attempted assassination in Vatican City to the holy city of Jerusalem, working to unravel a mystifying set of clues before tragedy strikes again.

In expanding the world for his characters and for himself, Carlson hopes that audiences find new dimensions and ways to relate to their struggles.

Carlson, a professor emeritus of religion and philosophy at Franklin College, has written eight books, including six mystery novels centered around Fortis and Worthy. Worthy is a highly decorated detective who is tortured by his inability to solve the one mystery that means the most to him. His obsession leads his wife to leave him and his daughter to run away, and he loses his faith completely.

He is paired with Fortis, a Greek Orthodox monk who offers more philosophical and spiritual context to the stories.

Carlson wrote the first book in the series, “Enter by the Narrow Gate,” in 1995. But his agent couldn’t find a publisher for the novel, leading Carlson to focus on writing nonfiction titles, such as his first book, “Peace Be With You: Monastic Wisdom for a Terror-Filled World.”

That book was published and did well. But in 2016, his fiction work experienced an revival. His publisher contacted him with good news: A publisher in Seattle wanted to publish not only his first mystery novel, but two additional ones that he had finished in the meantime.

Carlson tries to publish one of the mysteries each year, and he has books seven and eight nearing completion.

The idea for “Like a Thief in the Night” came from a desire by Carlson to have their characters evolve. He felt it was important to give the characters room to change.

“Because this is a series with the same two detective characters, I had a choice. They could stay the same from book to book, or you could have them develop and grow as the series unfolds. I chose to have them do that,” Carlson said. “But the two detectives couldn’t be so different from one book to the other that readers of the series feel confused, or in some cases, even betrayed.”

To do that, he expanded the world in which Fortis and Worthy were working. “Like a Thief in the Night” is a departure from the previous books in the series, in which the detectives dealt with smaller-scale mysteries set in a set location.

The story is set in motion by the assassination attempt on the Roman Catholic pope and ecumenical patriarch of the Orthodox Church. Fortis, who is present at the Vatican at the time of the attack, and Worthy, invited to join the investigation, race against time to determine who would want the two religious leaders dead.

“The villain in this story is also presented on a much larger stage. He’s presented as a chess champion, moving pieces — in this case people — around on the board,” Carlson said.

Along their journey, a self-proclaimed Irish mystic, an abnormal religious activity specialist and a priest-turned-mole help drive the story along from Rome to Turkey to Jerusalem.

“Every writer has their own writing process, and I really just start with a crisis that needs to be solved,” Carlson said. “I put my characters in that, and I don’t know what they’re going to do. I don’t know how the mystery will end. I’m like the first reader in the mystery, and letting my characters take the story where it needs to go.”

“Like a Thief of the Night” is available locally at Wild Geese Books in Franklin, as well as online at retailers such as Amazon and Barnes & Noble. People can also find a link to the book at Carlson’s website.

Seeing the way that readers enjoy his books is what keeps him pushing the adventures of Worthy and Fortis on.

“Writing a book is not a private thing, it’s a conversation you’re having with readers,” he said. “I’m just so grateful for people for who there is nothing more enjoyable than opening a book and getting lost in it, and letting it take you away.”

Janet Hommel Mangas: A successful marriage is like farming

Art for all: New shop forges connections through art