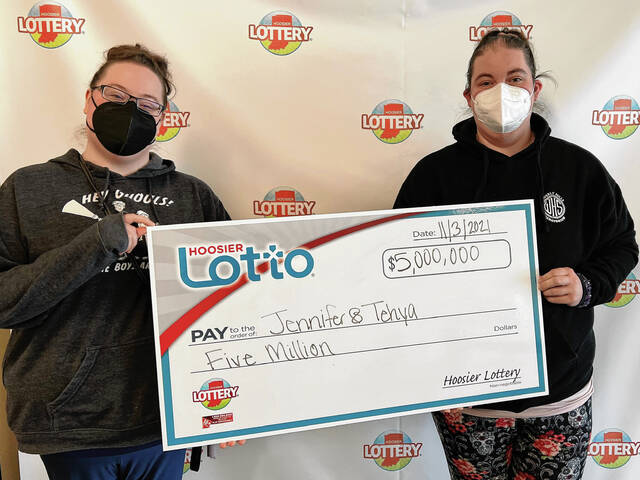 A pair of Franklin women cashed in with a $5 million Hoosier lottery ticket by matching all six numbers of the Oct. 29 Hoosier Lottery drawing. Jennifer Wilkinson and Tehya Wheeler will share the jackpot, which will be paid out to them over the span of 30 years. Initially, Wilkinson thought they had won $2,000, but saw just how much the ticket was worth after double-checking.

They bought their ticket at Casey’s, 3048 N. Morton St., in Franklin, according to a Hoosier Lottery news release.

“The ticket was scanned probably five times on the Hoosier Lottery App,” Wilkinson said in the release. “I thought it was a glitch.”

Wilkinson was in shock when she delivered the news, Wheeler said.

“Jennifer had no color in her face, and she whispered to me,” Wheeler said in the news release. “There was no screaming, as to not draw attention, but there were some tears.”

The two have no immediate plans for how they’ll spend the money, according to the news release.

Joey Russell didn’t know he had $1 million in his hands when he walked out of another Casey’s, 210 W. Center Cross St., in Edinburgh.

Russell is a frequent lottery player and bought the winning ticket along with two others. He didn’t know he had matched five of the six numbers on the Nov. 10 Powerball drawing until one of his grandsons told him there had been a winner at the Edinburgh Casey’s. Then, he checked his tickets, he said.

“I did not know what matching five numbers paid out,” Russell said in the news release. “I was thinking, maybe $10,000.”

With the $1 million prize, the Edinburgh resident hopes he can retire a couple of years earlier. He works at Caterpillar Inc., a construction machinery and equipment company, according to the news release.

The odds of matching five numbers without the Powerball are one in 11.7 million, according to the Hoosier Lottery.

“I never win anything,” Russell said in the news release. “I told my wife about the win, and at first, she did not believe me. Then she got a little excited.”

Federal courts side with Bargersville in First Amendment lawsuit