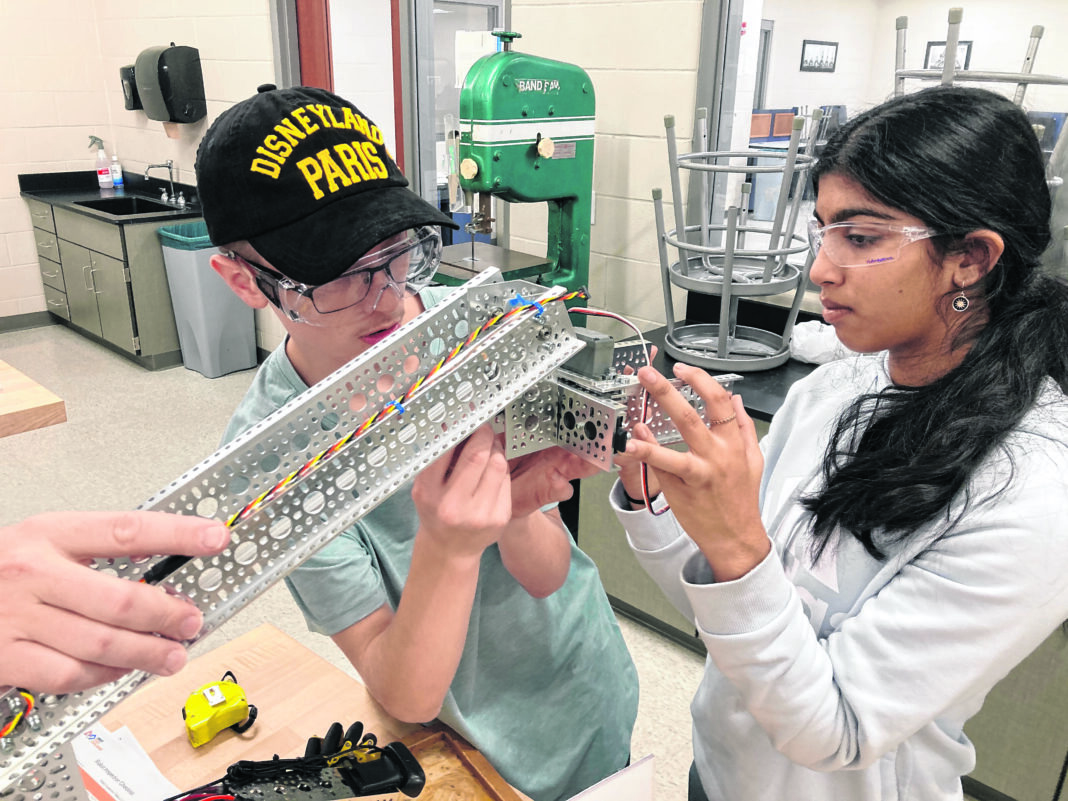 For the first time in the school’s history, Greenwood Community Middle School will host a robotics tournament Saturday.

A pair of Greenwood schools teams, Green Machine of Greenwood Community High School and Wired Woodmen of Greenwood Middle School, will take on schools from as far south as Columbus to as far north as Dyer. The two Greenwood teams have 12 students each and both compete in the FIRST Tech Challenge, which requires student-designed, built and programmed robots to complete certain tasks.

FIRST Tech Challenge consists of competitions for students in seventh through 12th grade. The league follows FIRST Lego League, from the same robotics organization, which students in sixth grade and younger take part in.

All 14 teams competing Saturday are in FIRST Tech Challenge, and the theme for this year’s competition is “Freight Frenzy,” said Chris Campbell, robotics coach and sponsor at Greenwood schools.

No other Johnson County school districts will take part.

“(The robots) are supposed to pick up items, these items are supposed to simulate packages being delivered,” Campbell said. “The robot can scan or use sensors to determine the size of the package they’re picking up, and then deliver it to shipping hubs, which are round stands that have three heights. The robots can deliver these articles, which are whiffle balls and different-sized blocks to shipping hubs on different levels to get more points.”

Jeff Thompson, now in eighth grade on the Wired Woodmen, started competing in robotics in fourth grade, he said.

“FIRST Lego League was the first thing I joined. I thought it was pretty cool and I really liked building with Legos,” Thompson said. “That got me really interested in my first year and it got me into robotics and then I programmed Lego robots. I got really interested in programming. That’s what I’ve been doing the past five years.”

While students can program robots during competition in FIRST Lego League, by the time they enter FIRST Tech Challenge, the robots are autonomous and have to be programmed ahead of the competition, which creates challenges, he said.

“With autonomous, you don’t know what’s going to happen,” Thompson said. “At any moment, it can mess up. Last year, when we tried to run autonomous one time, the robots kept breaking. It kept trying to do all the moves.”

Ishani Shah, a sophomore at Greenwood High School, helps build robots for her team, the Green Machine. Being part of a successful robotics team, however, isn’t just about building and programming, Shah said.
“I’ve noticed a lot of communication skills come out and leadership skills because you have to work as a team,” Shah said. “Communication is key to be a leader. You communicate with each other, problem solve. We run into a lot of problems. Even as a builder, sometimes our designs might not work, but it’s about coming up with a new design to build and cooperating with everyone.”