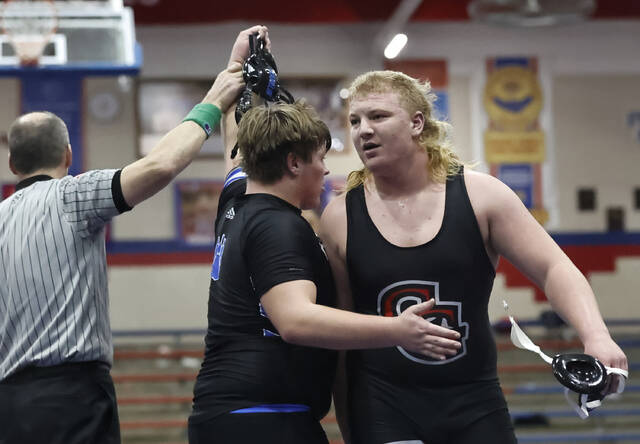 Occupying any of the four purple mats inside the Brownsburg High School gymnasium throughout Saturday morning and much of the afternoon were some of Indiana’s top teams and individuals.

So it usually goes with the annual Class 4A duals, the latest installment presenting 10 of the 14 wrestlers ranked No. 1 in the state in their respective weight classes.

The shorthanded Trojans enjoyed their moments, defeating Perry Meridian in the opening round, and then losing to second-ranked Brownsburg in a semifinal. Center Grove rallied with a dramatic victory over Evansville Mater Dei and, finally, a 32-24 win against Cathedral in the third-place match.

Crown Point won over the host Bulldogs, 29-28, in the championship match.

“We had two top five guys in the state not wrestling today, so to come out and still get third, these are some of the toughest teams in the state,” said Trojans coach Maurice Swain, who was minus the services of freshman 160-pounder Julian Weems and sophomore 285-pounder Nate Johnson.

Trojans senior Drake Buchanan, ranked first at 182 pounds, remained undefeated with a dominant performance. Center Grove’s other unbeatens for the day were junior Andre Merritt bumping up a weight class and excelling at 160, and Silas Stits, a freshman, winning both of his matches at 138 pounds.

Showcases such as the 4A duals can only benefit the Trojans, who travel to Warren Central on Saturday for the Metropolitan Interscholastic Conference tournament.

“It’s about getting good reps. We’re wrestling the top-ranked kids all day long,” said Center Grove senior Michael Tharpe, the team’s 126-pounder, of the 4As. “You’ve just got to go out there and have fun, really. I had a really good match with the Brownsburg kid, who is ranked seventh; 5-2.

“I get a good takedown, I win that match.”

Among the day’s more anticipated matches was one of its first.

Center Grove senior Hayden Watson, the state’s top-ranked 145-pounder, stepped onto the mat against Perry Meridian’s Matthew Koontz, ranked second. It was the first meeting between the two since Koontz edged Watson, 5-4, in a 132-pound semifinal at the state finals when they were sophomores.

Koontz won Saturday’s match by the same score. It was Watson’s first loss of the season.

“I mean, me and Matthew have been friends for a long time,” Watson said. “It’s not a rivalry. It’s just competition. It’s 1 vs. 2, but rankings are also just numbers. During that match, it could’ve went either way.

“I’ll meet him again at the state finals. I guarantee it.”

At Franklin, Roncalli finished second in the Class 3A duals following a 34-31 loss to Columbus East in the championship match. The top-seeded Royals led, 28-20, before the second-seeded Olympians won four of the final five bouts to take the title.

The host Grizzly Cubs, who defeated Floyd Central, 52-21, in the quarterfinals, bounced back from their semifinal loss with a 60-12 rout of Terre Haute South. Franklin then fell to East Central, 37-31, in the third-place match.