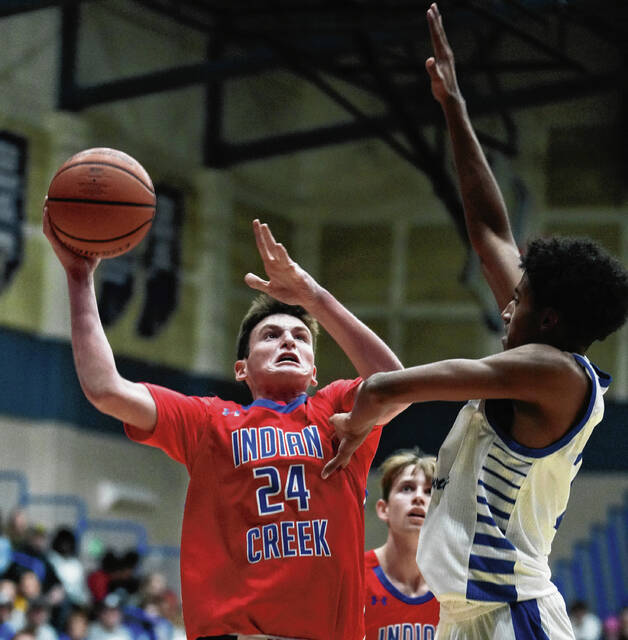 Indian Creek met Franklin in their season opener 49 days ago. A lot has changed in the 49 days since for both teams, but even with all the change, the Grizzly Cubs were still able to best the Braves, 68-56, in the opening round of the Johnson County tournament on Tuesday evening.

The Braves (3-8) and Braxton Christie struck first with a pair of free throws. Franklin’s Dylan Beverly and Micah Davis were the next to score with a floater and a 3 interrupted and followed by an abundance of possessions ending in turnovers or missed second-chance attempts for both teams. Davis added a bucket in transition and Wyatt Nickelson hit a free throw to make it an 8-2 Franklin lead to close the first.

Both teams seemed to improve their play in the second quarter, with Franklin heading into the half with a 21-16 lead. Davis was, as he has been all season, the fire behind the Grizzly Cubs’ transition offense, with two of his four points in the quarter coming on an electric steal and dunk. Bryce Armstrong didn’t let Davis go unanswered, stripping Franklin for two steals and an assist in transition.

Franklin jumped to an early 29-20 lead in the third when Tristan Coleman buried a bucket from the post with 4:57 left in the quarter. Twenty seconds later, Nickleson added to the lead, sinking a shot from beyond the arc. The back-breaking run continued with Davis throwing down a fast-break windmill dunk, followed by a steal that turned into another Nickelson 3. Davis then delivered the cherry on top with a four-point play.

With the Grizzlies ahead 48-31 after three, Indian Creek needed a great fourth to get back in the game. Javan Crouch set the tone with his and-one bucket. Christie followed with another, and the Braves eventually got as close as 62-56 when Landon Sichting scored with a minute and change left.

The foul game followed, and two perfect trips from Sam Auger and a 2-for-2 visit to the line from Carson Hunter finished off Indian Creek’s upset chances.

Davis finished the night with a game-high 23 points, Nickelson added 16 on five 3-pointers. On the Braves’ side, Crouch led Indian Creek with 20 while going 6 of 6 from the line (the team shot 14 for 14 on free throws overall).

Davis is confident in his team heading into the matchup against the Trojans.

“I felt like we did pretty good (tonight),” he said. “We could have been better on rebounding and boxing out, but we’re going to take this game versus Center Grove and beat them on Friday.”