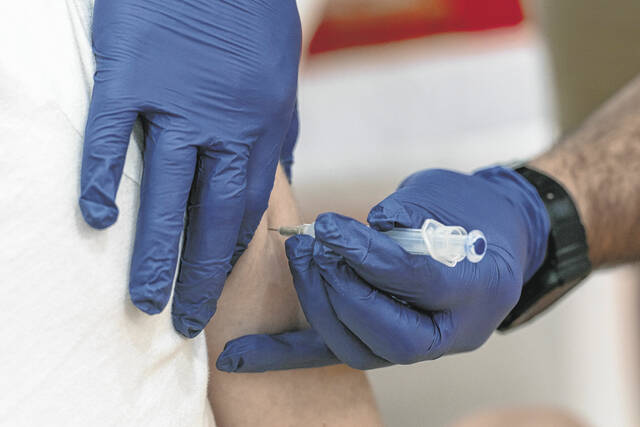 The U.S. Supreme Court decision on Thursday was a mixed bag for the Biden Administration’s COVID-19 vaccine mandates. The nation’s highest court found there is precedent for a healthcare vaccine mandate, but not for a mandate requiring vaccine or testing for companies with 100 or more employees.

The decision brought clarity to healthcare administrators, but bills under discussion at the Indiana Statehouse make the path forward uncertain for employers that were planning to implement a mandate of their own. Additional lawsuits brought by Republican attorneys general against the Biden Administration’s vaccine requirement for federal contractors and for childcare programs funded by Head Start are still pending.

Johnson Memorial Health and Franciscan Health Central Indiana officials are now preparing to implement the mandate. Community Health Network already has a vaccine mandate in place that was implemented prior to the mandate that will soon have to be in place for all healthcare facilities that receive Medicare and Medicaid funding.

Administrators breathed a sigh of relief when the mandate was stayed in December, just before it was set to take effect the first time. But they knew it was likely the healthcare mandate would eventually go forward, said Dr. David Dunkle, Johnson Memorial president and CEO.

Now that the mandate is back on, both local healthcare organizations are preparing to implement it.

Franciscan is currently evaluating how to proceed with the mandate across its hospital system, which has facilities in Indiana and Illinois. There are no numbers currently available regarding the vaccination rate for the Indianapolis hospital, said Joe Stuteville, media relations manager.

Dunkle and other Johnson Memorial leaders are going to meet Monday to decide how to proceed, he said. About 80% of Johnson Memorial employees are vaccinated or have received a waiver for a religious exemption, meaning that the hospital could lose up to 20% of its workforce if more don’t get the vaccine.

Johnson Memorial employees have been kept in the loop about the vaccine mandate and knew that the hospital would have to proceed with the mandate if the stay is lifted, Dunkle said.

Implementing the mandate will be tough for Dunkle, he said. Hospital leaders have respected personal choice about the vaccine and done everything possible to make the workplace safe regardless of vaccination status, he said.

“During the biggest labor crunch of our time, I’d hate to see any of our employees let go over this,” Dunkle said.

Local governments, schools and businesses with over 100 employees were preparing to implement the mandate, but others were waiting to do so until the high court’s ruling.

In the majority opinion, the court’s conservative majority said the administration has overstepped its authority by seeking to impose the rule. However, the three liberal justices argued in the minority opinion the court was overreaching by substituting its judgment for that of health experts.

The mandate from the U.S. Occupational Health and Safety Administration (OSHA) was designed to minimize the risk of COVID-19 transmission in workplaces by requiring private employers, along with state and local employers with OSHA-approved plans, with 100 or more employees to develop, implement and enforce a vaccine or testing policy.

The OSHA mandate was struck down after attorneys general from Republican-led states, including Indiana, challenged it with lawsuits and pursued the matter to the Supreme Court.

Johnson County, Franklin, Greenwood, Edinburgh and all six county school districts would have been required to implement the policies as they employ more than 100 people. The towns of New Whiteland, Prince Lakes, Trafalgar and Whiteland were not required to create a policy because they each have far less than 100 employees.

Officials from Franklin, Greenwood, Edinburgh and two school districts had been creating and reviewing policies but were waiting for the Supreme Court’s decision before finalizing their policies, officials said. Johnson County did not have any plans to create a mandate and was waiting to hear what the court ruled before proceeding, County Attorney Shena Johnson said in an email.

Employers, municipalities and schools are not barred from making their own vaccine policies by the decision, but local government officials said they are planning to wait on any policies until the state legislature makes a decision on two bills that would restrict vaccine mandates.

“With so many unanswered questions (about a mandate), it is not prudent to adopt a plan until adequate guidance is given,” Lynn Gray, Franklin city attorney, said in an email.

Edinburgh may still create some type of COVID-19 policy, such as a procedure for employees to follow if they are exposed to COVID-19, but the town council hasn’t made a decision yet, Cartwright said.

The county has no plan to implement a mandate regardless of the ongoing legislation, Johnson said.

Both bills being considered at the statehouse, House Bill 1001 and Senate Bill 3, would put restrictions on employers who require the COVID-19 vaccine for employees by effectively forcing them to accept any medical or religious reason for exemptions without further question. The bill would also end Gov. Eric Holcomb’s public health emergency while letting the state continue to receive federal emergency funds, the Indianapolis Business Journal reported.

SB 3 passed out of committee unanimously Wednesday, but HB 1001 is still under discussion.

With more vaccine mandates still in the court system, certain groups of American workers remain uncertain. Still, a vaccine mandate for federal contractors and a mandate requiring vaccines for staff and volunteers at childcare programs receiving Head Start funds and masks for children who participate in those programs are still undecided.

In a statement issued on the ruling, Indiana Attorney General Todd Rokita, who has signed onto each case challenging the vaccine mandates, said he is still working to make sure those Americans have medical freedom.

“The court quite correctly discerned the intrusive federal overreach of the OSHA rule,” Rokita said in the statement. “Now, we must continue our legal efforts to protect Hoosiers’ liberties from all the other draconian edicts unleashed by the Biden administration.”