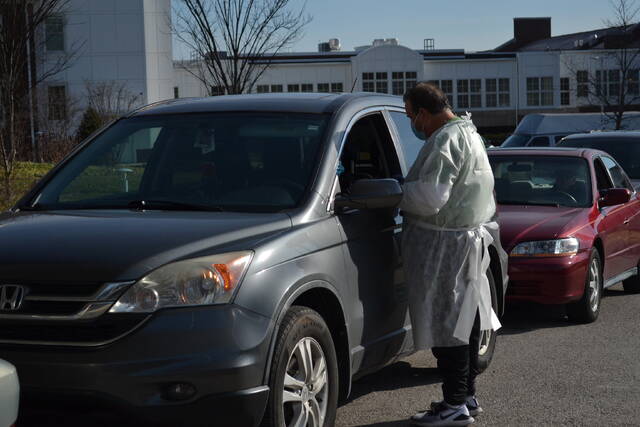 Community spread of COVID-19 across Indiana has reached a record high, and demand for tests has nearly depleted supplies at local health departments.

Cases are likely higher than what is being reported by the Indiana Department of Health because home COVID-19 tests aren’t reported.

Now, many Hoosiers are left scrambling for tests because omicron cases are more likely to mimic other common respiratory viruses and may come with symptoms that were not as common earlier in the pandemic, such as sore throat and vomiting.

On Wednesday, Parke County’s health department posted on social media that its test site in Rockville is completely out of tests. The post said the Indiana Department of Health did not have any tests on hand to resupply them.

The Johnson County Health Department received the same information on Wednesday, but was not completely out of tests, said Betsy Swearingen, health department director. The health department’s site at Compass Park has enough tests to last a week or two if demand holds steady, she said.

On Thursday, Swearingen received word from state officials that local health departments could order more tests, but is unclear how many will be available, given the ongoing national shortage, she said.

The state health department has restricted rapid tests to school children ages 18 and younger, and symptomatic people ages 55 and older. This restriction applies to sites run by county health departments and Gravity Laboratories sites, which are run in partnership with the state. That includes the Compass Park site and the Gravity site at the former Sawmill Woods Preschool in New Whiteland.

There are plenty of PCR tests on hand for those who are ineligible for a rapid test. However, results are taking longer than normal to get back.

The testing shortage is also affecting Johnson Memorial Health, but there are enough tests on hand to test employees and people coming to the emergency room with severe COVID-19 symptoms, said Dr. David Dunkle, president and CEO.

Still, Dunkle asks the public to avoid coming to the hospital for a test unless symptoms are severe or a health care provider has requested it.

Rapid testing is available at retail pharmacies including CVS, Kroger, Meijer and Walgreens, but appointments are hard to come by, as appointments book up quickly.

Four at-home tests are also available for free to every household in the United States at covidtests.gov. The federal government wants to make sure all Americans have access to testing. Signups for the tests are routed through the U.S. Postal Service, and tests are expected to ship within seven to 12 days.

Some experts were ready to declare the peak had arrived in Indiana, but numbers almost as high as the peak were reported Wednesday across the state, meaning the worst may be yet to come.

Earlier this week, COVID-19 hospitalizations at Johnson Memorial had dipped to 13, but on Thursday, there were 19 COVID-19 patients. The hospital was off diversion for several hours Thursday, and the wait time for beds was shorter than in recent weeks, Dunkle said.

“We continue to see high volumes and we continue to work hard to find staff to cover. Like many businesses, we’ve been impacted by employee absenteeism because of COVID-19,” Dunkle said. “Unfortunately, hospitals don’t have the luxury to say we are closed today.”