In what will likely be the most expensive project in the school district’s history, Clark-Pleasant schools plans to spend up to $238 million on a project that would include major renovations to Whiteland Community High School’s campus.

That amount reflects the second of two proposals from Indianapolis-based construction firm Lancer + Beebe, presented during a public meeting Tuesday, and accounts for construction, inflation and soft costs, such as attorney and consulting fees, furniture and anything not associated with physical construction. The construction alone would cost about $169 million, and with inflation, about $190 million, Superintendent Patrick Spray said.

The project would be paid for over the course of 15 to 20 years as the school pays off debts on other projects. With projected population growth and property value increases, the district could have between $250 million and $400 million to work with during that time without raising property tax rates, Spray said. 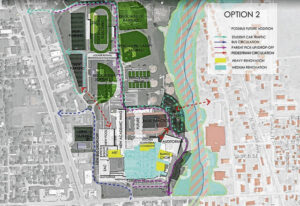 As is, this proposal for renovations at Whiteland Community high School would cost about $238 million, including construction, attorney fees and financing costs, and accounting for inflation, according to estimates from Lancer+Beebe.

The high school served its purpose when it was built in 1957. But now, with more than 2,000 students at the school and the district’s population continuing to grow rapidly, there is demand for newer, expanded facilities, said Misha Bilyayev, project manager at Lancer+Beebe.

“You’ve got a great facility at the high school, but there are issues from the age of things, they need to be replaced,” Bilyayev said. “Things that were fine 10, 20 years ago are too tight for the current student population.”

This option would require the relocation of the football field to the northside of campus, which would cost about $16.5 million, according to the presentation.

The first option, presented in November, includes a two-story building between the north annex and main high school building that would house administrative offices, the school’s cafeteria and the media center.

A pair of major differences exist between the two proposals. Under the first proposal, students would still have to travel between buildings, but the football field would stay where it is, sparing the district the cost of relocating it. Both proposals include a new auditorium, performing arts spaces, new pool facility and student activities center. Both proposals include plans to either relocate or renovate baseball, softball and tennis areas, and both would create separate traffic areas for student drivers, parents picking up and dropping of students, and school buses. 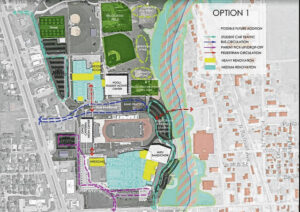 The first option would cost about $172 million, according to Lancer+Beebe documents.

Though the second option is more expensive, there are numerous advantages, including easier supervision and more time for instruction, as students wouldn’t need as many minutes to travel between classes, said Kimberly Fifer, assistant superintendent.

“One of the key pieces in the second drawing was safety. Supervision is very difficult to have when staff is spaced out to follow half our student body going back and forth,” Fifer said.

There are still opportunities for changes to the proposals, but the final design will most likely resemble one of the two options Lancer+Beebe presented Tuesday, Spray said.

During the next 60 days, discussions between Lancer+Beebe and school officials will continue, during which the final proposals will be refined. This spring, members of the public have opportunities to give feedback on the project during school board meetings, and during the second such meeting, the board would vote on the project. After the board votes, members of the public would have 30 days to gather 500 signatures of any objectors, which would qualify as a remonstrance and trigger a referendum. If there is no remonstrance, construction would likely start during the summer or fall of 2023 and take about four years to complete, Spray said.