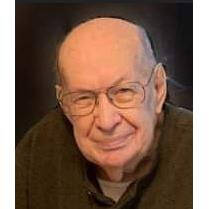 John Edward Hart, age 90 of rural Warren County, IN, and longtime resident of Trafalgar, IN, passed away on Tuesday, January 25, 2022.

John was born in New Point, IN on July 23, 1931. He was the son of Marshall and Edith Elnora (Cook) Hart. He was a graduate of New Point High school in 1949 where he served as class president. He moved to Trafalgar, IN in 1961 where he resided until August 2021 when he moved to Warren County to live with his son and daughter-in-law, Rusty and Karen Hart, who cared for him. He married Patricia Parmer and she preceded him in death in 1973. He later married Shirley Vest and she preceded him in death on June 11, 2011.

John owned and operated Hart’s Electronics in Franklin, IN for over 50 years where he specialized in TV and radio repair and satellite installation. He loved to watch the Chicago Cubs and Cincinnati Reds baseball. He enjoyed watching his animals around his home, mushroom hunting, and raising flowers, especially hibiscus. He was a hard worker, and had enjoyed cutting and burning firewood.

Surviving are, Son, Sheriff Rusty Hart (Karen) of rural Warren County, IN; Adopted sons, Brian Hart of New Mexico, Kevin Hart of Indianapolis, IN, and Kenneth Hart (Barbara) of Franklin, IN; Step-son, Bill Beckner (Nancy) of Greenwood, IN; three sisters, Ida Harrell of Kokomo, IN, Viola Minning of New Point, IN, and Betty Lemmons of Greensburg, IN.

Private family services will be at a later date with inurnment at Rossburg Cemetery, New Point, IN.

Online condolences may be made at www.gradyfuneralhome.com.