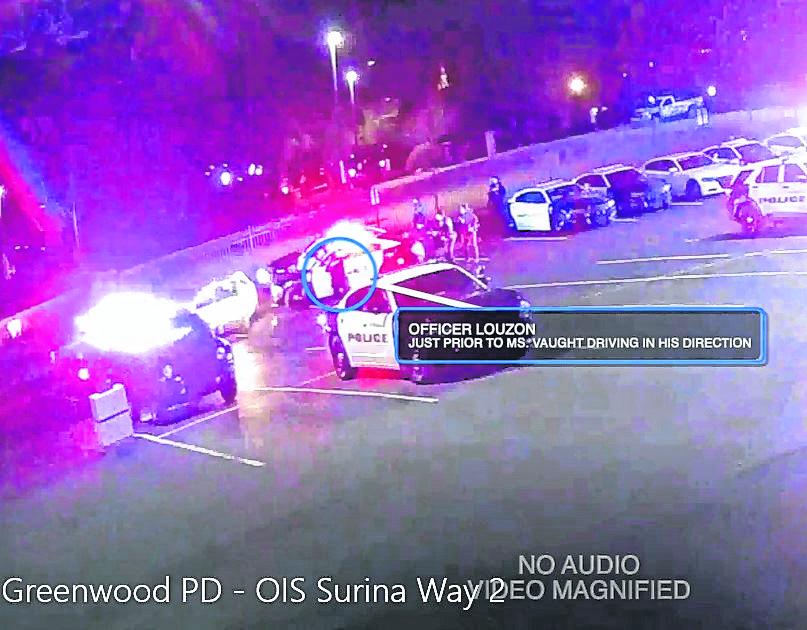 The Greenwood Police have released body camera and security camera footage from the pursuit that ended in the shooting death of a Greenwood resident in late March.

The footage shows the circumstances surrounding the fatal shots that were fired at Monica W. Vaught, 49, in the Greenwood Justice Center parking lot at 186 Surina Way late on March 29.

The incident began at approximately 11:16 p.m. that evening, when Greenwood Police responded to a report of a drunk driver near Madison Avenue and County Line Road. A female driver, later identified as Vaught, was driving southbound in the northbound lane on Madison Avenue. When police located her about one mile south of the county line and attempted to make a traffic stop, she did not stop and a pursuit ensued, according to the video.

The video includes audio from the 911 call.

The video shows footage from the pursuit from one officer’s perspective. The chase wound around Old Town Greenwood, with turns around Meridian, Broadway, Wiley and Longdon streets until she comes to rest momentarily after crashing into the guidewire on a utility pole. The video shows an officer get out of his car and ordered her to do the same with a gun drawn. She did not comply and instead drove away, the video shows.

The chase continued on Meridian, Brewer and Main streets, until she turned onto Washington Street and into the parking lot at the Greenwood Justice Center.

In the parking lot, Vaught rammed into a police car, then drove around the parking lot and appeared to be coming to a stop in a parking spot, footage shows.

At that point, footage shows the two officers drove their cars over to box her car in. They got out of their cars and were joined by additional officers with guns drawn.

On the tape, officers scream for Vaught to get out of the car, but she remains in the car. They attempt to shatter her windows, but are unsuccessful. They put spiked stop sticks under the car’s wheels and managed to bust her tires.

Still, she breaks out of the box by accelerating and taking a sharp turn toward two of the officers. The officers fire shots at the vehicle as she drives past, footage shows.

She circles the parking lot after breaking out of the box. While circling, she drives within close proximity and then directly toward an officer. The officer runs to get out of the way and multiple officers fire shots at the car, the footage shows.

The incident ends with Vaught crashing into a fence on the west side of the parking lot, footage shows.

Officers rushed to the car to administer first aid and called an ambulance. Despite their efforts, she was pronounced dead at the scene, Greenwood police say.

As a result of the internal investigation, GPD’s review board found one officer who was not involved in the shooting didn’t turn his bodycam on until several minutes into the incident, and he was given a counseling form, as this was his first violation. Another officer was coached on positioning himself in the path of a moving vehicle, Greenwood Police Chief James Ison said a statement Friday.

Vaught’s three children want the public to know she was more than how her life ended. They published an obituary detailing her personal struggles with mental health.

To the outside world they say she was successful: the loving mother of three children, valedictorian of Greenwood Community High School’s Class of 1991 and 1995 salutatorian at Indiana University-Bloomington. She was sensitive, empathetic and proud of her Asian heritage.

Despite her success, she was plagued by mental health issues that she attempted to hide from family members, they said.

“Our family has worried about her for years, trying again and again to get her the help she so desperately needed. We have watched from the sidelines, helplessly, as she attempted to hide her struggles and we have watched with worry as she began to be overcome by them. That worry and helplessness has been replaced by a deep feeling of loss that exists knowing we will never hear out beautiful mother’s voice again,” the obituary said.

They hope their mother’s story inspires people who are struggling to get help.

“We live in a cruel world where mental health issues are stigmatized and swept under the rug. This obituary, we pray, instills hope in someone, if only one person. Hope that more people will accept help and be open about their demons. It is to tell people there is nothing to be ashamed of. There are people who love you with every ounce of their being and want nothing more than for you to just be happy,” the obituary says.