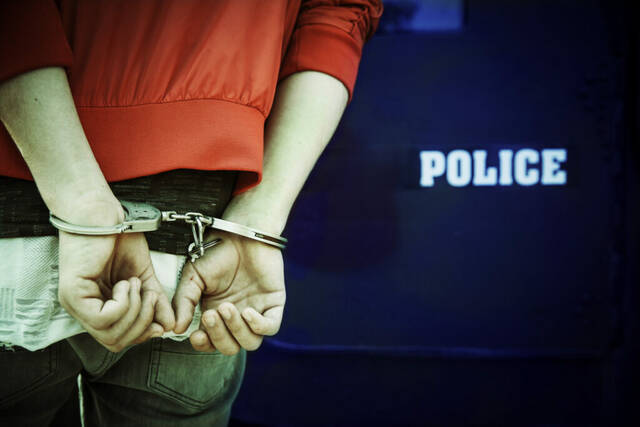 400 block of Pelenor Drive: Reported at 7:16 a.m. Friday that juvenile victim was involved in criminal mischief.

2125 N. Morton St., Walmart: A man reported at 4:14 p.m. Thursday that after he made a purchase his wallet fell out of his pocket and when he discovered it was missing and returned to the store he could not find it.

1130 block of Timber Creek Lane: Reported at 9:16 a.m. Thursday that a criminal mischief in an ongoing neighbor dispute had occurred.

1170 block of Timber Creek Lane: Reported at 5:34 p.m. Thursday that a fraud/theft had occurred.

420 block of Southgate Drive: Reported at 10:50 a.m. Thursday that a fraud had occurred.

3130 Meridian Parke Drive, Angie’s Pool and Spa: Reported at 8:29 a.m. Thursday that a catalytic converter was cut off a company vehicle.

Antione Dewayne Davidson, 36, Indianapolis; arrested on a charge of forgery; held on $1,200 bond.

James Thomas Eakle, 35, homeless; arrested on warrants for failure to appear in court; held on $758.50 bond.

Dustin Keith Fletcher, 27, Greenwood; arrested on a warrant for failure to appear in court and wanted on an out of county warrant; held without bond.

Tosha Nicole Nixon, 39, Franklin; arrested on a charge of interfering in the reporting of a crime; released on $1,000 bond.

Nicholas Sorley, 22, Sharpsville; arrested on a charge of child solicitation; held on $6,600 bond.

Dustin Ussery, 35, Anderson; arrested on a charge of child solicitation; held on $6,600 bond.

Zachariah Buck and Rachel Krieg both of Franklin

Daisy Lafferty and Dakota Schmitt both of Bargersville

Alexis Rice of Greenwood and Bradley Ervin of Chandler, Arizona

Cierra Allen and Brandon Padgett both of Greenwood

Jennifer Mobley and John Rupp both of Greenwood

Natalie Williams and Jeffery Smith both of Brandenburg, Kentucky

Makenzie Baker and Gavin Caywood both of Greenwood

Dana Wilson and Shane McKenna both of Franklin

Mackenzie Jarrett and Christopher Flynn both of Franklin

Haley Tillotson and Alexander Nevins both of Franklin

Robert Lawson and Miranda Gill both of Franklin

John Martinez and Tanya Rahrar both of Greenwood

Amber Willhoite and Chad Helton both of Greenwood