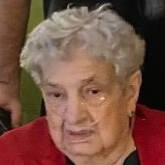 Gertie Gates, 95 of Edinburgh, Indiana passed away May 19, 2022 at Homeview Health and Rehabilitation in Franklin, Indiana. She was born January 4th, 1927 in Furth, Bavaria, Germany. She was the daughter of Otto and Margareta Meyer. She married Stanley Inlow and later married Donald Gates.

Gertie was fearless, tough and always unafraid. She often said that after living through WW2 that nothing else could ever scare her. She became a US citizen in 1963 but always considered Bavaria, Germany her home.

Her last outing was at her daughter, Ramona and son in law, Jim’s house on Mothers Day. She was given the choice of what type of dinner she wanted. They thought she would want a German meal but instead she requested Tacos. It was a beautiful day spent with family.

Gertie also had a special family whom she “adopted.” Larry and Linda Ricketts, Rusty Ricketts, Dusty and Jenny Ricketts. She loved sending cards and whenever she sent cards to Dusty and Jenny in Florida she always included greeting their dogs. Linda was her bonus daughter and they spent much time together. Gertie loved her so. Linda was always there through many events (good and bad) in Gerties life.

Rusty spent many Sundays with her. Over the 30 plus years their friendship developed into a Grandma/Grandson relationship. They played board games (which she liked to win) and had many pizza dates.

It is hard to put into words the relationship that Gertie had with Megan Johnson (Grandson Erics wife) She was her caregiver for more than 10 years, also her confidant, co-conspirator, and most of all her loving granddaughter. Without Megan, Gertie would not have lived such a long, happy and independent life. She was able to live in her home until age 94. Gertie’s daughter, Ramona, will never be able to express her gratitude and love for Megan.

She was preceded in death by her parents, husbands, niece and brother, Arthur Meyer.

Gertie was of the Lutheran faith. She retired in 2004 from Bob Evans restaurant in Columbus.

Gertie’s piece of advice was to “Live your life, travel and enjoy every moment.”

A private graveside service will be at Rest Haven Cemetery in Edinburgh,

Arrangements made by Eskew-Eaton Funeral Home in Edinburgh, Indiana.

Donations can be made to the Bartholomew County Humane Society.