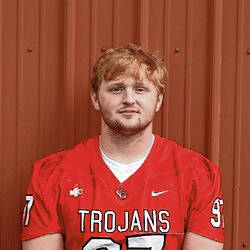 Owen Green and Jacob Newlin were among those on campus when the University of Indianapolis hosted its annual freshman orientation in early June.

Next for the Center Grove graduates, both of whom will play football for the Greyhounds, is a closer glimpse of the facilities they’ll soon call home.

Named to the South All-Star team, Green and Newlin return to the UIndy campus a week from today to prepare for the annual North/South Classic at Ben Davis High School on July 15.

“I’m looking forward to showing everyone else what I can do, and showing my college coaches what I can do,” said Newlin, a 6-foot-2, 280-pound offensive lineman who started at center last season for Center Grove. “I think it will be cool because I’ll be on campus, but get to represent (Center Grove) one last time.

“It’s kind of like one last ride for our school. Being able to be part of two state championship teams, you can’t really ask for more than that.”

Both the North and South All-Stars take part in two-a-day practices at Key Stadium, allowing Green, Newlin and any other UIndy commits playing in the game to become better acquainted with what soon will be their home turf.

Green and Newlin will room together in the days leading up to the North/South game.

Both players are grateful for the opportunity to extend their prep careers by one game, not to mention wear the Center Grove helmet one more time.

The Trojans went undefeated the past two seasons on their way to Class 6A state championships; the program’s win streak sits at 28 games – 18, if one just counts regular-season competition – entering the August 19 opener against visiting Warren Central.

“When we played our last game against Westfield (in the 6A final in November), it was, like, wow, it’s over,” said Green, a 6-1, 270-pound defensive lineman. “And then you find out it’s really not.

“Me and Jacob have been working out the last few weeks at UIndy, and we get to stay in a dorm, so it’s kind of a sneak peek of next year. I get to meet a lot of the people I was enemies with in high school, and I think there are some of my (South All-Star) teammates who will be going to UIndy.”

Eric Moore, who is preparing for what will be his 24th season as head coach at Center Grove, has had a number of former players take part in the week of being a South All-Star.

Each story is different, yet at the same time special.

“It’s special anytime someone gets to represent Center Grove football in the All-Star game,” Moore said. “And for them, it’s neat to be able to go on the school’s Wall of Fame as All-Stars. Owen and Jacob are just hard workers, and I’m extremely proud of both of them.”