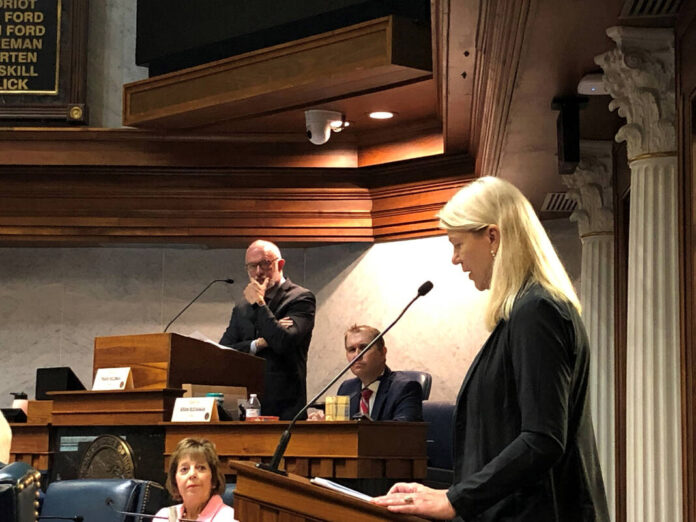 INDIANAPOLIS (AP) — Indiana Republican lawmakers remained far from agreement Wednesday on whether to go along with the governor’s proposal to give each taxpayer a $225 rebate from the state’s surging budget surplus.

The Republican-dominated House and Senate have advanced vastly different plans during the special legislative session for using $1 billion or more of the state’s record $6.1 billion in cash reserves, with the Senate version nixing the refund payments in favor of paying down future teacher pension obligations.

Republican Gov. Eric Holcomb has described the payments as inflation relief, but GOP Senate leaders have raised concerns about further fueling inflation with the rebate and worries about inflation pushing up the cost of planned state construction projects.

Republican Rep. Sharon Negele of Attica, the House plan’s sponsor, said Wednesday she believed residents prefer a direct rebate and was hopeful of reaching a compromise in the coming days.

The Republican divide over the refund plan comes as attention has largely been focused during the special session that started July 25 on the debate over a bill aimed at largely banning abortions in the state. Lawmakers are aiming to make decisions on both matters before the session’s Aug. 14 adjournment deadline.

The governor’s office didn’t immediately reply Wednesday to a request for comment on the rebate plan negotiations.

The Senate proposal would suspend the state’s 7% sales tax on electricity, water, natural gas and other utility bills for six months. A legislative report estimates would save residential and business customers about $300 million — less than one-third of the projected $1.1 billion that would go out in rebate checks that House Republicans have supported.

The Senate plan would also cap until next summer the state’s gasoline taxes at about one cent less than the current record level of 62.4 cents a gallon. Republican legislators for several months have rebuffed calls from Democrats to suspend the gasoline taxes to help motorists.

House Republicans have stood firmly behind Holcomb’s rebate plan. It would send payments to an estimated 4.3 million people who filed state tax returns and are eligible for $125 payments that started going out in May under the state’s automatic taxpayer refund law, along with allowing perhaps 800,000 people who didn’t file returns to request the money.

Senate tax committee Chairman Travis Holdman, a Republican from Markle, said the Senate plan would both reduce the tax burden on residents and protect state finances by directing $400 million toward a teacher pension fund’s future obligations and about $200 million to cover rising construction costs.

House and Senate Republicans are also advancing plans that would direct more money toward programs that help pregnant women, children and people who adopt children as a companion step to the tighter abortion restrictions being considered.

Democratic legislators have called for additional steps from the state surplus, such as directing larger rebate payments to lower-income families, expanding childcare programs and removing the state sales tax on infant-related products such as baby clothing,

“There are too many mothers, too many families that will be negatively affected because we didn’t do more,” Democratic Rep. Greg Porter of Indianapolis. “Another missed opportunity.”

This story is by Tom Davies of The Associated Press