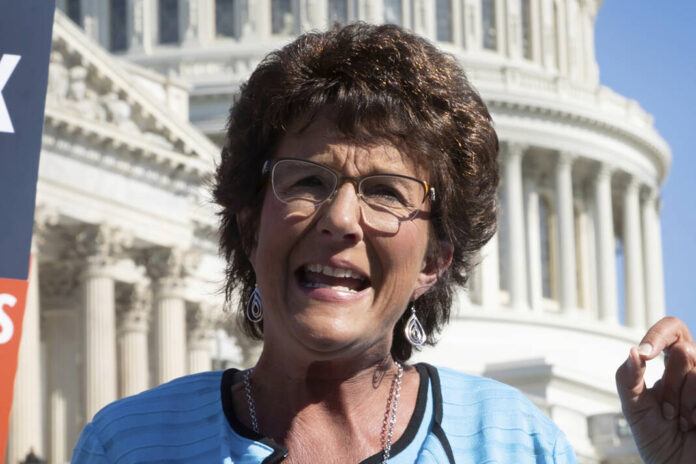 INDIANAPOLIS (AP) — Police have changed their description of the crash that killed Indiana Republican U.S. Rep. Jackie Walorski, saying Thursday that it was the SUV in which she was a passenger that crossed a state highway’s centerline and caused the head-on crash.

Walorski and two members of her congressional staff died in the Wednesday afternoon crash in northern Indiana, along with the woman driving the other vehicle, the Elkhart County Sheriff’s Office said.

The department’s initial account of the crash was that the car driven by Edith Schmucker, 56, Nappanee, Indiana, crossed into the SUV’s path, but the office released a statement Thursday saying investigators had talked with witnesses and viewed video evidence that their preliminary determination of which direction the vehicles were traveling was incorrect.

Investigators determined that the SUV driven by Zachery Potts, 27, of Mishawaka, Indiana, crossed the centerline for unknown reasons in a rural area near the town of Wakarusa. Potts was Walorski’s district director and the Republican chairman for northern Indiana’s St. Joseph County. Also killed in the crash was Emma Thomson, 28, of Washington, D.C., who was Walorski’s communications director.

Walorski, 58, was first elected to represent northern Indiana’s 2nd Congressional District in 2012. She previously served six years in the state’s Legislature. Walorski was seeking reelection this year to a sixth term in the solidly Republican district.

WASHINGTON (AP) — Republican U.S. Rep. Jackie Walorski was killed Wednesday in a car crash in her northern Indiana district along with two members of her congressional staff and another person, police said.

The crash happened about 12:30 p.m. when a car crossed the center line on state highway and collided head-on with the SUV Walorski was riding in, the Elkhart County Sheriff’s Office said. Three people in the SUV, including Walorski, 58, were killed, as was a woman driving the other car, authorities said.

Walorski, who served on the House Ways and Means Committee, was first elected to represent Indiana’s 2nd Congressional District in 2012. She previously served six years in the state’s Legislature.

“She has returned home to be with her Lord and Savior, Jesus Christ. Please keep her family in your thoughts and prayers,” Walorski’s chief of staff Tim Cummings said in a statement.

Walorski and her husband, Dean Swihart, were previously Christian missionaries in Romania, where they established a foundation that provided food and medical supplies to impoverished children. She worked as a television news reporter in South Bend before turning to politics.

Also killed in the crash were Zachery Potts, 27, of Mishawaka, Indiana; Emma Thomson, 28, of Washington, D.C.; and Edith Schmucker, 56, of Nappanee, Indiana, according to the sheriff’s office.

Cummings confirmed that Potts and Thomson were members of Walorski’s congressional staff. Thompson was Walorski’s communications director, while Potts was her district director and the Republican chairman for northern Indiana’s St. Joseph County.

Schmucker was driving the other car, according to the sheriff’s office. The crash, which occurred in a rural area near the town of Wakarusa, is still under investigation.

“Jackie loved Hoosiers and devoted her life to fighting for them,” Young said in a statement. “I’ll never forget her spirit, her positive attitude, and most importantly her friendship. All of Indiana mourns her passing, along with the tragic deaths of her staff Emma Thomson and Zach Potts.”

Walorski was seeking reelection this year to a sixth term in the solidly Republican district.

She was active on agriculture and food policy in Congress, often working across the aisle on those issues. A co-chair of the House Hunger Caucus, she introduced legislation with Democrats to bring back a Nixon-era White House event on food insecurity, the Conference on Hunger, Nutrition, and Health, which will be held in September.

Walorski was a reliable Republican vote in Congress, including against accepting the Arizona and Pennsylvania electoral votes for Biden following the Capitol insurrection.

As a member of the Indiana House, Walorski pushed anti-abortion legislation and opposed gambling expansion proposals. She became a favorite of the conservative tea party movement.

Walorski lost a close 2010 congressional race to Democrat Joe Donnelly before narrowly winning the seat in 2012 as Donnelly made a successful run for the Senate. She had easily won her reelection campaigns since then.

“She passionately brought the voices of her north Indiana constituents to the Congress, and she was admired by colleagues on both sides of the aisle for her personal kindness,” Pelosi said in a statement.

Pelosi ordered the flags at the U.S. Capitol to be flown at half-staff in Walorski’s honor. The White House said its flags would be lowered Wednesday and Thursday, and Indiana Gov. Eric Holcomb issued a similar flag directive for the state.

“At every level of public service Jackie was known to be a positive force of nature, a patriot, and a relentless policymaker with an unwavering loyalty to her constituents,” Holcomb, a Republican, said.

Democratic Rep. Annie Kuster of New Hampshire said she and Walorski bonded as newly elected members of Congress in late 2012 over their husbands’ shared love of jazz music and became friends.

“I was proud to work with her on a variety of critical issues, including legislation to address the addiction crisis, end sexual violence, and help military sexual assault survivors access the care they need,” Kuster said.

This story is by Brian Slodysko and Tom Davies of The Associated Press.