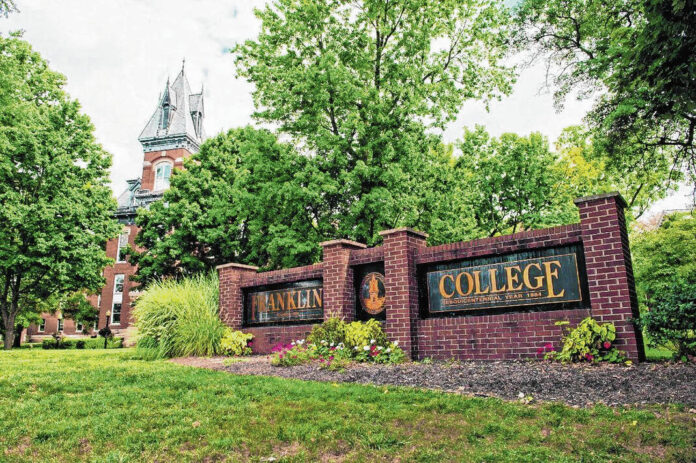 Administrators at Franklin College and the University of Indianapolis are facing declining enrollment and preparing for what higher education experts call a demographic cliff.

According to an analysis from Carleton College, Midwest college enrollment in 2029 is projected to be about 85% of what it was in 2012. This matches a decrease in the number of Midwestern 18-year-olds in that time span, according to the forecast.

The birth rate in the United States has declined markedly since the 2008 recession, falling from 69 births per 1,000 women in 2007 to 56 in 2020, meaning there will be a decline in eligible college freshmen starting in four years and continuing for the foreseeable future, according to the Centers for Disease Control Vital Statistics Report.

Franklin College enrollment has decreased in recent years, from 1,034 in 2017 to 962 in 2021, and the school, just like others throughout the nation, will likely be faced with a greater enrollment challenge in the future. That’s something administrators are trying to figure out how to overcome, Franklin College President Kerry Prather said.

“Several things are happening at once. Nationally, we’re about four years away from a fairly precipitous decline in the general demographic of college-age students. Exacerbating that, over the last two years, the percentage of Indiana high school graduates matriculating to college has gone down fairly significantly,” Prather said. “All of those are headwinds we will have to contend with and develop a strategy to overcome.”

The University of Indianapolis had a decrease in enrollment from 4,579 in 2020 to 4,426 in 2021. Officials have already started to see the impact of a smaller pool of students vying for admission, said Neil Perdue, the university’s executive vice president and chief strategy officer.

“We’re starting to see a shift in prospective students’ behavior in Indiana across the vast majority of institutions,” Perdue said. “There are fewer graduating seniors in high school in Indiana in general, and in Marion County we’re already seeing the impact of fewer degree-seeking students.”

But Prather said he believes Franklin College can keep enrollment steady, and has a goal of growing by 100 students during the next five years. The plan centers around increasing focus on science, technology, engineering and math in the liberal arts-focused institution.

Franklin College has added a neuroscience major and started a digital fluency initiative, which is funded by a grant from Eli Lilly and Company. Even for students not in a STEM major, digital fluency is key to career mobility after college and can make the school worth the money students put into it, Prather said.

“With the tech layer, we’ve equipped them with whatever they’re going to use in their careers to make sure they enter the profession and graduate from here with those proficiencies,” Prather said. “Every year we spend time with graduates with Cummins, Salesforce, Lilly, OneAmerica — places where pools of alums are working — and we ask them for advice about what’s going on in their professional worlds and almost all the feedback has been tech-related.”

As with Franklin College, UIndy administrators saw an opportunity to retain current students and attract new ones via STEM, and in 2018, the college added an engineering school.

“We wanted to make sure we were offering programs in the areas of highest demand and connecting students in areas of STEM education. Providing a new school of engineering was one of those strategies,” Perdue said. “We’ve also recognized how important it is to build relationships with high schools and employers so you can help individuals know what opportunities are available to them as they graduate.”

In order for colleges to survive the demographic cliff, they’ll have to convince students going to college is worth it, Prather said.

“I think the greater opportunity is how to persuade more Indiana high school students of the quality of life and financial potential of a college degree, and then also, the business community in Indiana is crying out for more college graduates,” Prather said. “There’s not enough college graduates to meet the demand. We’ve gotta make the argument to high school students about why a college degree will serve them well, not only in the immediate future, but their entire future. We have to provide a product that achieves that.”