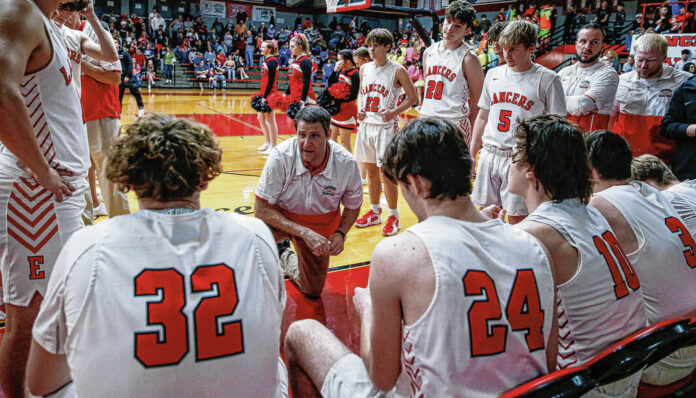 But the Lancers are delving into rare territory this week. They’re ranked No. 1 in the state in Class A for only the second time in school history after holding that position for one week late last season.

“It means a lot, especially for us seniors, because coming in here as freshmen, we went 6-18, so being able to just turn the program around from there and see our success today and all our hard work pay off, that’s good,” senior guard Caleb Dewey said.

Dewey, a four-year starter, is the star of the show, averaging team-highs of 22.8 points, 6.8 rebounds, 2.5 assists and 2.3 steals a game. He’s also closing in on the school’s all-time scoring record; with 1,320 career points heading into this Friday’s game at North Decatur, is on track to break Kyle Wuest’s mark of 1,421 later this month.

Senior point guard Jarrett Turner has picked up some of the scoring load left by the graduated seniors. Turner is averaging 14.3 points, while senior Connor Ramey adds 10.8 points per contest.

“This time last year, (Ramey) was actually a full-time JV player, so he’s made a lot of progress,” Edinburgh coach Keith Witty said. “Everybody is going to focus in on Caleb, but we have other guys that can score, and relieve that pressure off him a little bit.”

The Lancers have steamrolled their first four opponents by an average of 23 points a game. They opened their Mid-Hoosier Conference schedule with a 66-44 win against Waldron on Saturday and travel to North Decatur this weekend and Hauser on Dec. 16.

Edinburgh went 22-4 last season, with two of its losses coming to Class 4A schools (Greenwood and Shelbyville) and the other two against Class A state champion North Daviess. With North Daviess having jumped to 3A this year, the path to the state finals is a little clearer.

“We had a conference win starting off on Saturday, which was big for us,” Witty said. “It’s early in the season, so obviously, there’s a lot of basketball still to be played. The past two years, plus this year, we’re 44-10, so to have that kind record, I think it’s a testament to where the program is at, and I think it says a little bit about the work our kids have put in. We’ve put a ton of work in, and it’s showing on the court.”