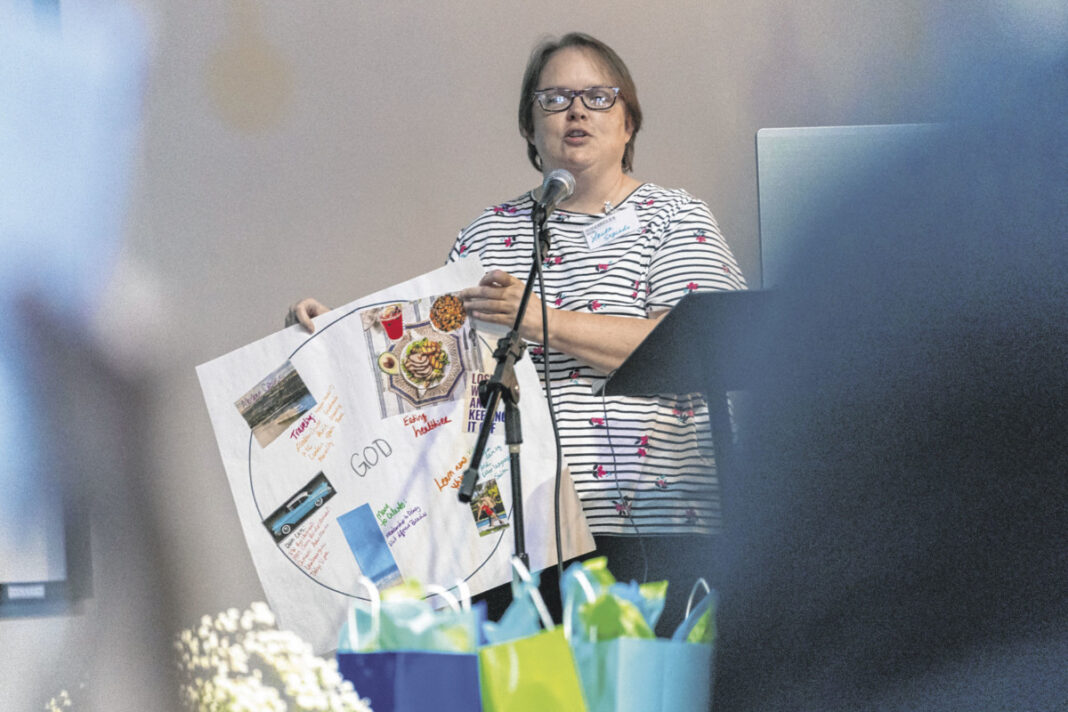 Dreams were easy to envision, but figuring out how to make those hopes a reality was much more difficult.

Laura Segundo had always known poverty; generations of her family had experienced it. Her own fortunes ebbed and flowed. When it seemed like she was finally getting ahead, something else would pull her back down into crisis.

The Greenwood resident still held onto the dreams she had always hoped for: a classic car, moving to someplace warm, traveling around the world. But she didn’t know what steps to take to reach those goals.

“I grew up having a lot of dreams, but never turned them into long-term goals. I always dreamed about owning a vintage car, but unless I make decisions that get me to that point, I’m never going to get it,” she said.

Segundo has spent the past three months working tirelessly to turn around her situation and become financially stable. Working with the local anti-poverty program Circles Johnson County, sponsored by the Bridges Alliance of Johnson County, she is one of three most recent graduates of the Surviving to Thriving workshop.

Once they graduate, they become Circle Leaders — people who have struggled with poverty themselves, and can use their perspective to relate and lift others up.

“You can have a voice. I’m not the only Social Security recipient who is struggling to have housing,” said Nancy Phelps, another new graduate of the program. “I know there are programs out there, and I’m fortunate enough to have participated in other programs. But there’s a lot of us out there who don’t know how to find those programs. Becoming a Circle Leader, I not only get to help myself, I get to help others.”

The journey for the new batch of Circle Leaders is just beginning, and work remains to solidify their financial well-being. But the work they’ve put in so far is inspiring, said Leslie Daugherty, coordinator for Circles Johnson County.

“They’ve shown commitment to the program. They were there every week,” she said. “They have goals in place, and I think they’re very excited to be on their next step.”

In early September, Segundo, Phelps and the other graduate of Surviving to Thriving, Sean Wallace, gathered with Bridges Alliance leadership to celebrate their transition to the next part of the program.

During the event, the three new Circle Leaders presented the vision boards they had created. The boards outlined goals they had for themselves if they could break poverty’s hold.

Their visions were ranged from pragmatic, hopes such as eating healthier, continuing their education and keeping a budget, to more far-reaching, such as owning a luxury car.

Segundo’s board covered goals such as taking an Alaskan cruise, owning a classic car such as a Chevy Bel-Air or a Volkswagen Bus, and learning new skills such as ballroom dancing.

“We talk a lot about, for people that are low-income, the difference between dreams and goals,” she said. “A lot of the things on my vision board are things I’ve always kind of dreamed about, but trying to figure out a way to make them a reality.”

Bridges Alliance of Johnson County is a collaboration between businesses, social service agencies, churches and individuals working together to end poverty in the community. The program provides the tools, resources, support and relationships necessary to be successful, helping people establish independence and stability in their lives.

The organization uses parts of two different nationally recognized anti-poverty programs. Bridges Out of Poverty focuses on understanding the hidden rules of society that can keep people from succeeding. At the same time, Bridges Alliance has also worked with a group called Circles USA. People interested in breaking the cycle of poverty in their lives take part in a 12-week workshop called Surviving to Thriving. They meet each week to learn about how to budget, apply and interview for a job, and set goals.

“It’s kind of an overview class, to help them gain some of the skills they might not have had,” Dougherty said.

Segundo wanted to be part of Surviving to Thriving to pull free of poverty. But she also was searching out a community that understood what she had gone through in the past, and what her situation was currently. Throughout 2020, she had gone through a divorce, straining her financially. In December, she was diagnosed with COVID-19, forcing her to leave her job. She has been out of work since then.

“Throughout my adult life, it was like I had one foot on each side. I’ll do really well for a while, then something like (the pandemic) happens,” she said.

Part of the Surviving to Thriving program teaches participants to be more intentional about relationships. Building a community is what appealed to Phelps.

“Sometimes you’re faced with that cliff effect, where you can either go over the line and fall, crash and burn, or you’re able to steady yourself. If you don’t have a connection with the community, then you have nothing to look forward to and nothing to steady you. You don’t have any hope,” she said.

Phelps had struggled with housing in the past. She relies on Social Security to survive, and she was worried about where she would live after her apartment complex announced it was leaving the Section 42 affordable rental housing program. The future rent would take up nearly all of her monthly income.

She is active in the Systems of Care program, which helps families find access to behavioral and mental health resources as well as assists them in overcoming other challenges they face. That was where she found out about the Circles concept and becoming a Circles Leader.

“It was about learning more about improving job skills, getting back into the work force, participating, giving back to the community and connecting. That was what intrigued me to get involved in it,” she said.

After graduating from Surviving to Thriving and becoming a Circle Leader, they are paired with intentional friends called Allies, who help them continue working toward the goals they have set.

“They have a tight community already, but they’ll be able to form relationships with Allies who are there to encourage them and cheer them on, and to lift them when things aren’t going well,” Dougherty said.

For Segundo, that relationship will be invaluable as she continues along her path out of poverty.

“I’ve gone through financial courses twice through my church, and it didn’t stick. It’s nice knowing there’s going to be someone there to hold me accountable, that can help me follow through with my goals,” she said.

The next session of Surviving to Thriving is expected to start sometime in November, and organizers are looking for the next group of people who want to take part.

Participants must complete an application, meet with a coordinator and have secure housing. They are expected to attend every weekly class, be on time, complete homework assignments, follow all the rules the group agrees on, and respect participants and volunteers.

In doing so, they’ll become part of an organization that can provide the support and guidance to truly change their lives, Dougherty said.

“You have a community that is supporting you. You can make a plan, but to stick to that plan is tough on your own,” she said. “To have someone else holding you accountable in a nice way while helping to connect you to other resources you might need is really powerful.”

The next session of the Surviving to Thriving class is now accepting applicants. Here’s what you need to know:

What is it? Surviving to Thriving is a 12-week program designed for people and families struggling with poverty who want to change their lives.

Who organizes it? The class is put on by Bridges Alliance of Johnson County, a comprehensive approach to ending the cycle of poverty in the community.

What does it include? Surviving to Thriving provides you with education, resources, plans, and support as you navigate financial instability. This class encourages stabilization and community transformation. Together with allies, you will develop goals, learn from each other, build a friendship, and collect resources to stabilize you and your family

HOW TO BE AN ALLY

What is it: Bridges Alliance of Johnson County, a collaborative effort of businesses, agencies, churches and residents aiming to reduce and end poverty, is in need of volunteers to serve as Circle Allies.

What do they do: Allies are paired with an individual working to break the cycle of poverty, to provide support and guidance as they work to meet the financial, employment, education and other goals that they’ve set.

How to volunteer: Go to bridgesalliancejc.org, where applications can be found.