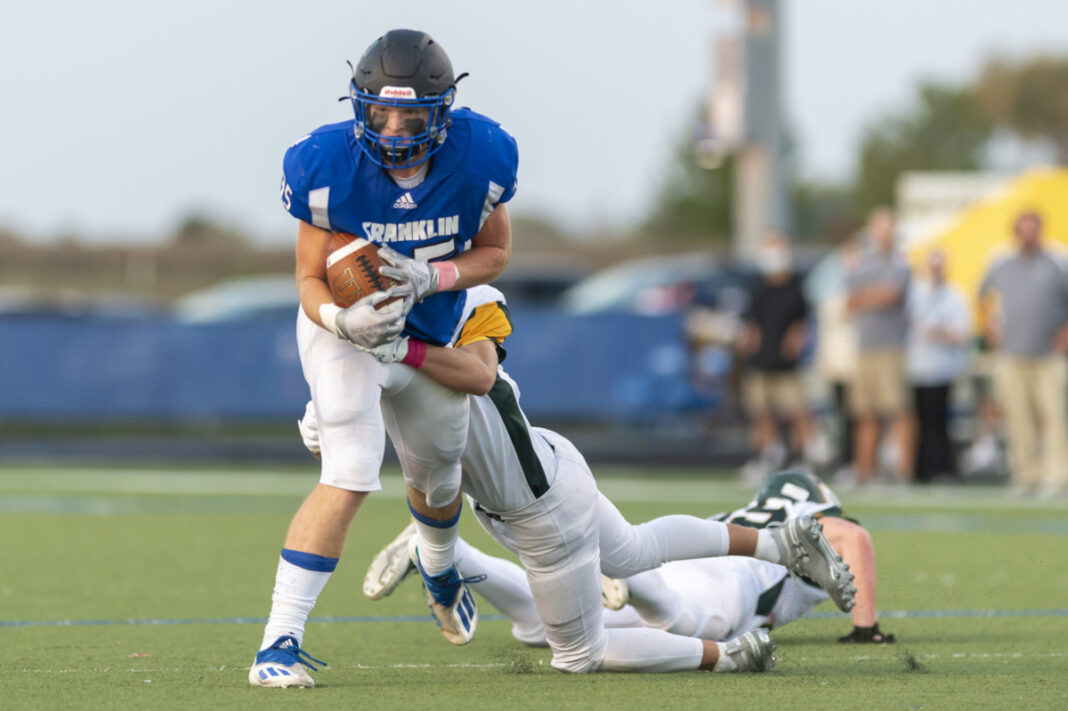 Visions of Mid-State Conference supremacy no longer realistic, Greenwood and Franklin leaned on the pride associated with their decades-long rivalry.

On Friday, it was the host Grizzly Cubs clutching bragging rights for the next year.

Franklin jumped on the Woodmen early, often and in a variety of ways for a convincing 42-14 victory in what was the 10th annual Cannon Clash.

Senior running back Titus Phillips led the way for the Cubs (3-5, 3-3), rushing for 143 yards on 15 carries, including touchdown runs of 5, 24 and 53 yards. Sophomore quarterback Clay Pinnick completed 6 of 10 pass attempts for 107 yards and a score and was his squad’s second-leading rusher with 75 yards.

“It’s been kind of an up-and-down year for us, but it feels good here at the end to be playing our best football,” said Grizzly Cubs coach Chris Coll, whose club closes the regular season at Decatur Central next Friday. “Tonight was our most complete game. Defensively, we played really well. Offensively, we executed, and the kick coverage was outstanding.

“We’ve got some talent, but we understand who we are and the style of play that we have to bring to the field. (Tonight) is good for our kids. It’s two (wins) in a row. Two in the conference.”

Franklin made its statement early, leading 21-0 with touchdowns scored via runs from Phillips and John Shepard and Pinnick’s 33-yard slant to junior receiver Max Clark.

A fumble recovery by the Grizzly Cubs on the game’s fourth play set up the initial scoring drive, which covered 56 yards in eight plays with Phillips taking it the final 5 yards up the middle at 6:15 of the first quarter.

Franklin’s defense asserted itself on the ensuing series, forcing a Woodmen punt to set up a 58-yard Grizzly Cubs drive. The big play was Pinnick being flushed out of the pocket and sprinting 58 yards to the Greenwood 3. Shepard’s 1-yard plunge at 1:14 doubled the lead.

The Woodmen (2-6, 1-5) were driving early in the second, but junior defensive back Nate Owens intercepted a Brock Riddle pass. That enabled Franklin to mount its third scoring drive, the left-handed Pinnick tossing a dart over the middle to Clark, who caught the ball in stride at the Greenwood 20 and took it the distance.

Greenwood’s most impressive drive of the opening half was its last, as it went 77 yards in 12 plays to gather much-needed points right before the half. Senior Noah Apgar’s 6-yard touchdown run with 1:13 left in the second trimmed the lead to 21-7.

Phillips’ second TD scamper made it 28-7 midway through the third. Junior defensive back Zach Klein then got in the act, his 67-yard interception return to paydirt coupled with Phillips’ third scoring run pushing the spread to 35 points, meaning a running clock went into effect with 1:05 left in the third period.

Extracting positives from the loss won’t be easy for Greenwood coach Mike Campbell.

“Franklin outhit us, outhit us, they outhit us. Then, when that ended, they outhit us,” Campbell said. “They were more physical. They played harder than we did. All the credit to them, but that was not a great effort by us tonight in all phases of the game.

“We’re going to get back to work. We’ve got a great Whiteland team coming up next Friday, so we’re certainly not going to feel sorry for ourselves.”