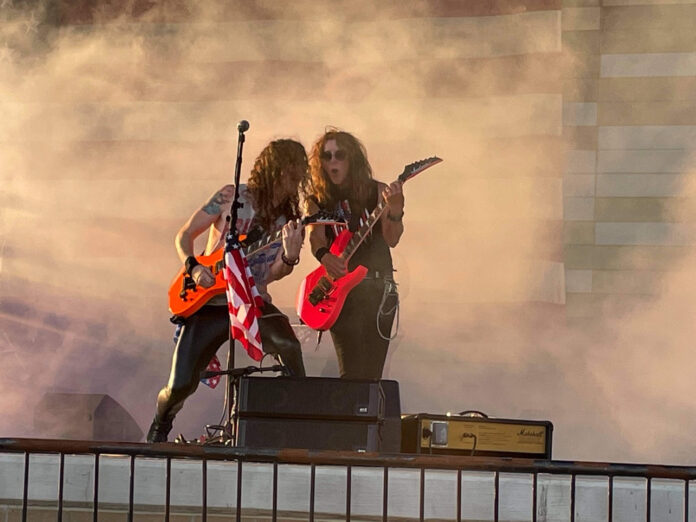 The Decade of Decadence was defined by big hair, big guitars — and big fun.

Colossally coifed rockers donned Day-Glo Lycra or jet-black everything to scream-sing about extreme good times, with the occassional power ballad mixed in.

The ‘80s may be long gone, but that spirit lives on in every bombastic drum solo and fiery guitar lick that GlamëricA unleashes.

“We are all about bringing the fun back to rock ‘n’ roll. A lot of bands have gotten really serious the last couple of decades, but we play an all ’80s set list, all the fun songs and bring a very high-energy show to the stage,” said Roger Bowers, bass player for the band.

The Indianapolis-based rock band brings their high-energy show to Franklin as the headliner for the annual Daily Journal Street Party.

In between raucous tunes by the likes of Def Leppard, Guns N’ Roses, Van Halen and even Prince, festival-goers can enjoy eats from local food trucks, a beer and wine garden and displays by the Franklin Fire Department and Franklin Police Department bike patrol.

The event will be from 6 to 10 p.m. Friday at the DriveHubler.com Amphitheater in downtown Franklin.

The Daily Journal has been hosting a summertime festival since 2014. Originally conceived as a celebration of the newspaper moving into its new downtown Franklin headquarters, it has become a tradition each July, though the event was canceled in 2020 due to the pandemic and last year because of inclement weather.

Bowers started the band nine years ago after having played with some of the other members in groups in the past. They had wanted to delve into more of the 1980s sound and the iconic bands that defined it, but never had the opportunity.

With this new group, they could finally explore that wild time.

“We had some buddies we called up, and auditioned some people, and it grew,” Bowers said. “As soon as we got out there playing, it blew up on us. People really liked what we put out there. We’ve had great crowds for nine years now.”

Throughout their show, GlamëricA taps into all different facets of the ’80s rock scene. Of course. they bring out hits from Poison and Motley Cruë.

But crowds can expect tunes from more hard-rock groups such as Tesla and AC/DC, as well as classics from Journey and Whitesnake.

“Our ultimate goal is to send everyone home with a smile. We believe in playing great songs from the ’80s that are fun and that everyone can sing along to,” Bowers said. “We’re entertaining, we’re running around on stage. For a couple of hours, we get to pretend we’re rock stars.”

Along the musical journey, GlamëricA adds a few special touches that have become crowd favorites.

“We have a cold spark machine and confetti cannons that people love. We always do a selfie with the crowd every night, which always goes over really well,” Bowers said.

The Street Party comes in the midst of a busy summer for the band. They’ve already played massive Indiana-centric events such as the Holy Rosary Italian Street Festival in Indianapolis and the SummerBash ‘22 in Muncie.

Later this month, they’ll get to play at the epicenter of the hair rock scene when they travel to West Hollywood, California, to perform at the Whiskey a Go Go at Crüe Fest, a fundraiser organized by Motley Crüe frontman Vince Neil.

“This is our first time doing it. Vince Neil lost his daughter to childhood cancer, and it’s a benefit they’ve done for 19 years for her charity,” Bowers said. “When we were asked, we were more than happy to fly out there and help.”

When attendees of the Street Festival aren’t headbanging and dancing away to the ’80s hits, they can recharge with a variety of refreshments, both for kids and adults.

A variety of food trucks have signed on to serve food, including Brozinni Pizzeria, Johnson’s BBQ Shack, Antojitos-Rosita and Mo’Bowls. Local favorites Scoops & Treasures, Jones Kettle Corn and Lemon Shake-ups and Aw’sum Snoballs have the sweet treats to keep you cool.

And Franklin Elks No. 1818 will serve up a variety of wine and beer for the grown-ups in the crowd.

The Street Festival is free and open to the public. No outside coolers, food or drinks are allowed, though people are encouraged to bring lawn chairs.

Featured performer: GlamëricA, performing the best rock of the ’80s

Janet Hommel Mangas: An ode to one thing I hate

In stitches: Quilt gardens worth the drive to Elkhart County