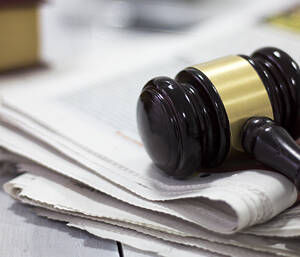 Two men who were facing criminal charges in Johnson County courts have pled guilty and been sentenced for child solicitation and driving a vehicle while having a forfeited license, respectively.

The Daily Journal has previously reported about these cases, and is sharing this update to give resolution to our earlier reporting on crime in the community.

A Franklin man who was accused of fondling and sending lewd photos to a 14-year-old-girl has pleaded guilty and been sentenced to eight years.

Tad D. Brewer, 51, was sentenced to a total of eight years in prison on charges of child solicitation and sexual misconduct, both Level 5 felonies, by Johnson County Circuit Court

Judge Andrew Roesener on Nov. 10. He previously plead guilty to the charges on June 10, and as part of a plea agreement, a single charge of child molestation as a Level 4 felony was dismissed.

Six years of his total sentence will be executed, with the remaining two years suspended to probation. He also received a 21-day jail credit, according to the sentencing order.

It was reported to police in April 2020 that Brewer had bought the teen a cell phone, which he asked her to keep private, according to a probable cause affidavit filed in August 2020.

Brewer used the cell phone to text the teen and send her inappropriate photos, including pornography and sexually explicit photos of himself, court documents said.

The teen also alleged Brewer touched her breasts on two separate occasions within about 2.5 years. Between Jan. 1, 2018 and Feb. 14, 2018, Brewer reached down her shirt under her bra and touched her breasts. Then, between Feb. 1, 2020 and April 25, Brewer “grabbed” her breast, this time over her clothes. She told police she slapped him that time, and he laughed at her, court documents said.

A Charlestown man will serve four years in prison after he led police on a high-speed chase in a car with a stolen license plate on Interstate 65 in March.

David A. Hoppes, 45, pleaded guilty to operating a motor vehicle after forfeiture of a license for life, a Level 5 felony, and possession of methamphetamine and resisting law enforcement, both Level 6 felonies, before Johnson County Circuit Court Judge Andrew Roesener on Nov. 10.

He was sentenced the same day to four years in prison, all executed and was given a 225-day jail credit. He was also recommended for a Recovery While Incarcerated program, according to online court records.

Franklin police were on patrol when they were notified of a FLOCK license plate reader hit on a stolen vehicle driving on King Street west of the I-65 interchange on March 31. The notification described the car as a white van that was reported stolen in Kentucky, according to a Franklin Police Department report.

Police located a green car with the plate registered to the white van at a gas station in the 2100 block of E. King Street. An officer tried to speak to Hoppes, the driver of the car, but Hoppes looked at the officer, got in the car and drove away, the report says.

The officer followed Hoppes’ car as he left the gas station at a high rate of speed. The officer activated his emergency lights and pursued the green car as it drove onto Umbarger Lane, crossing east King Street and going on Paris Drive northbound, the report says.

Hoppes was observed making several traffic violations, including driving more than 110 mph in a 70 mph zone, according to the report.

Greenwood police and the Johnson County sheriff’s deputies set up stop sticks near the Main Street exit in Greenwood, and Hoppes drove over them. Hoppes’ vehicle began to slow down rapidly and pulled toward the left shoulder of the northbound lane of the interstate. Hoppes exited his car and fled on foot westbound — crossing the southbound lanes as police yelled at him to stop, the report says.

Officers pursued Hoppes on foot as he entered a drainage ditch and entered a wooded area. When police caught up to him and searched they searched him, they found two syringes in his pockets. They also found a container and a plastic bag containing methamphetamine, the report shows.

Hoppes told police the car was not stolen, but the license plate was, he told police. The car belonged to his friend in Kentucky who had given it to him to use, and said one of his friends had put the stolen plate on the car because the original plate had expired, the report says.

The car did not have a vehicle identification number attached to it. Officers were unable to determine if the car was stolen, according to the report.

Police also found two additional license plates, both from Indiana, in the trunk. The first plate had an altered registration date, and had not been registered since 2021. The second plate was reported stolen in Kentucky, according to the report.