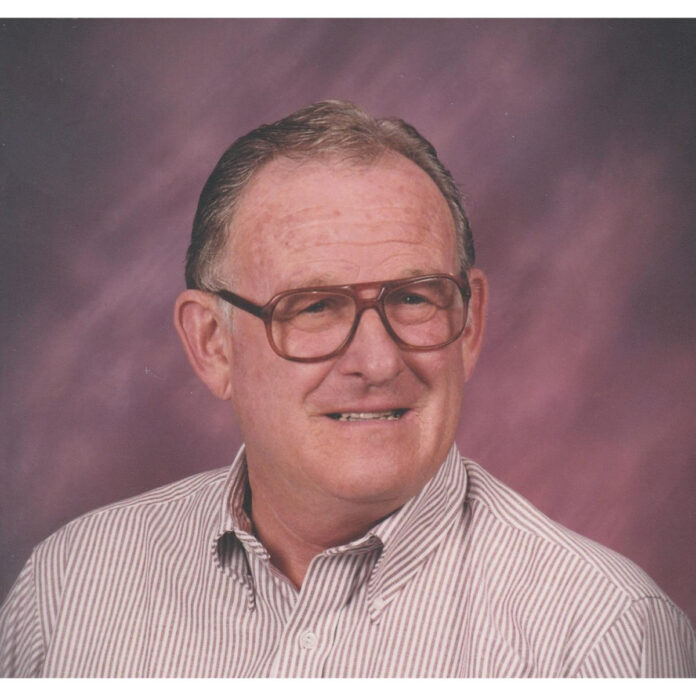 Darrell Wissler Crawford, 83, of Greenwood, Indiana, passed away peacefully on October 4, 2021, at Eskenazi Hospital in Indianapolis. With his family by his side as he drew his last breath, Darrell earned what he called his “great reward” for a life filled with hard work, a lot of luck, and copious amounts of laughter.

Darrell was born on June 25, 1938 to Lawrence C. Crawford and Verda N. (Wissler) Crawford in Topeka, Kansas. His parents would later move the family to Columbus, Ohio, where Darrell excelled in academics and music at Columbus North High School. While pursuing his Bachelor of Science degree in Civil Engineering at The Ohio State University, Darrell joined Pi Kappa Alpha and was the brother most called upon to entertain the frat party at the piano until the break of dawn.

After graduation, and with a signed proclamation in 1961 from President John F. Kennedy for his appointment as a commissioned officer, Darrell began his career with the U.S. Coast and Geodetic Survey (later renamed NOAA). While stationed at Patrick Air Force Base in Cocoa Beach, Florida, in 1965, he met his future bride, Evelyn “Ebbie” Freeney, an elementary school teacher who lived in his apartment complex. The story goes that these two would have never married had it not been for Ebbie’s persistence to meet the “handsome officer next door” using her pet cat as the bait. The rest, they say, is history. Darrell married Ebbie on June 19, 1966, in her hometown of Rolling Fork, Mississippi.

In 1967, Darrell moved his family to Lafayette, Indiana, to pursue his master’s degree in Civil Engineering at Purdue University and where he welcomed his first child, Judd. As is the life of a military family, the Crawfords then moved from Lafayette to Kansas City to Seattle, where his daughter Jessica was born, and then back to Kansas City to Detroit and again to Seattle by 1974. By this time, Darrell earned his highest career rank as Commander and spent many months each year at sea as the Captain of the NOAA ship McArthur. By 1976, he accepted the landmark assignment of charting the entire Gulf of Alaska for the installation of the Trans-Alaska pipeline in Valdez.

After 20 years of distinguished service to NOAA, Darrell retired in 1981 and supported Ebbie in her pursuit of a new career in insurance and a new life in Greenwood. Although retired, Darrell could not rest (and Ebbie wouldn’t let him). He found a second career as a bus driver for Greenwood Community Schools, and for the next 35 years, he drove children of all ages, abilities, and “questionable behaviors” (he would sarcastically say) to school, activities and sporting events.

When he wasn’t driving a bus full of kids, Darrell’s interests included singing barbershop, playing piano and trombone for the Greenwood City Band, ushering for Indianapolis Symphony Orchestra concerts, volunteering for CASA of Johnson County, gleefully doing taxes for all his family members the old fashioned way with pencil and calculator, and watching his beloved Kansas City Chiefs and the Indianapolis Colts (or the Dolts, if they lost) play on Sunday. His entire family knew his favorite hobby, though, was just piddlin’ around the house.

Darrell was a 40-year member of the Greenwood Presbyterian Church, where he rarely missed a Sunday service. He served as a deacon, a financial secretary, a member of the choir, and as the first director for the church’s food pantry, Samaritan Services.

Darrell loved a simple meat-and-potatoes meal and never declined a good piece of pie. He was always up for a great joke, a bad pun, or a witty limerick, and he would repeat it for weeks. His taste in music was “anything before 1959,” as he once said. “After that, music got too loud, lyrics got too weird, and songs became too long,” he quipped. He liked his humor dry, conversations brief, the checkbook balanced, voices in tune, the TV set to the History Channel, a toothpick at the end of every dinner, and his family educated, employed, and happy.

A public Celebration of Life service will be held at the Greenwood Presbyterian Church on Saturday, October 23, at noon, with a reception to follow in the church’s Fellowship Hall. A private burial service will take place on Sunday, October 24, at Valley Grove Cemetery in Milton, Indiana. In lieu of flowers, donations in Darrell’s memory can be made to the Greenwood Presbyterian Church, 102 W. Main St., Greenwood, IN 46142, or Johnson County CASA Program, 18 W. Jefferson St., Franklin, IN 46131.

You are invited to read Darrell’s obituary at www.stpierrefamilyfuneral.com, where you may sign the guest book and leave a personal message for the family.