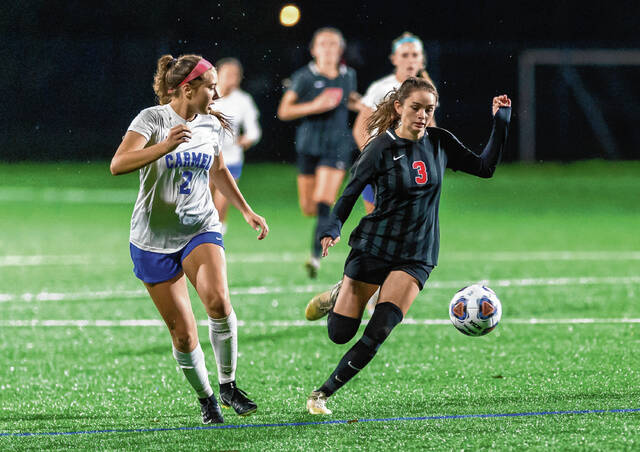 Center Grove has long prided itself on figuratively standing apart from the crowd.

Now, the Trojans will be doing so in a literal fashion as well.

The current members of the Hoosier Crossroads Conference — Avon, Brownsburg, Fishers, Franklin Central, Hamilton Southeastern, Noblesville, Westfield and Zionsville — voted on Thursday to remain an eight-team league rather than expand and bring the Trojans and Carmel into the fold.

With no other realistic options currently at their disposal, Center Grove will position itself as an athletic independent for the foreseeable future. A Carmel athletic department official indicated that the Greyhounds would do the same.

“We kind of knew going into this there was no guarantees,” Center Grove athletic director Scott Knapp said. “When one door closes, another one opens, and I’ve always had that mindset. We’ll do the best we can to give our student-athletes the best opportunity to compete at a high level. That’s what we do as Trojans.”

Operating as an independent is far from unheard of; there are more than two dozen Indiana high schools whose teams are not currently affiliated with conferences. Most of those are smaller Class A schools, but there are a handful of bigger schools in that group as well, with Cathedral far and away the most notable.

At least until now. Carmel, the state’s largest high school, has been far and away the most successful athletic program in the state. Center Grove could make an argument for itself as the current No. 2.

Members of the Metropolitan Interscholastic Conference since its formation in 1996, Center Grove and Carmel were both unanimously voted out of that league by the six remaining schools three weeks ago after openly showing interest in joining the HCC.

In a joint letter released after that vote, the MIC schools stated their belief that the Trojans and Greyhounds “no longer share the vision that we are more than an athletic conference, that athletics should not drive our decisions, and that our unique characteristics are what make us strong.”

That pre-emptive move by the MIC placed considerably more importance on Thursday’s vote, which was by no means a slam dunk for either school. A source at Carmel had expressed nervousness in recent weeks, noting that his friends at HCC schools had been “very tight-lipped about it all.”

Knapp says that he holds no ill will despite the outcome, and that Center Grove will continue to schedule games against long-standing rivals from both the HCC and the MIC

“My goal as an athletic director is always to put together a competitive schedule, so that won’t change,” Knapp said. “Obviously, the one sport where it’s challenging is football.”

Indeed, scheduling could become an issue in Center Grove’s marquee sport. While the Trojans will almost certainly continue at least some of their rivalry series with their former MIC colleagues — Carmel and Warren Central would seem like the most likely candidates — and recent Week 9 staple Cathedral is still there, most other viable in-state opponents are locked into their own conference schedules and don’t have much flexibility.

That could mean that the Trojans’ future schedules include more games against out-of-state teams.

“That’s where we might have to get creative,” Knapp said. “We might have to travel to Louisville and Cincinnati, but there’s quality competition there — and it might be something we need. Granted, we’ve had two successful years; you can’t do much better than we did the last two years. But when it comes to talent, it’s peaks and valleys. We’ve been on top for the last few years; reality will hit at some point, and I just have to make sure we’re still playing quality opponents and setting our kids up for success.”

Center Grove football coach Eric Moore said Thursday evening that he hopes most of the rivalries with MIC schools continue; altering the schedule to find replacement opponents, he points out, would be just as hard for those teams as it would be for the Trojans. There simply won’t be that many available teams out there who are capable of competing at a similar level.

In many sports, independence won’t make a huge difference in scheduling, apart from maybe offering some more flexibility once contracts with some of the less competitive MIC opponents expire.

“If the pitching’s not there (on the opposing side) and then we go and we face Roncalli’s girl, it’s hard,” Trojans softball coach Alyssa Coleman said. “So hopefully finding a more consistent level of competition; that was the direction we were going, and so we’ll just continue that path.”

In terms of finding a new conference to call home, Center Grove’s options were considerably limited after being voted out of the MIC and turned away by the HCC. Most of the other leagues in and around Indianapolis wouldn’t be particularly great fits as currently constituted.

The Mid-State Conference would offer proximity and three baked-in county rivalries with Franklin, Greenwood and Whiteland, but there would be severe competitive imbalances in sports such as football, where even reigning league champion Decatur Central has been blown out by the Trojans in each of the last two seasons. Whiteland has not played Center Grove since the 2017 season and hasn’t been keen on a series restart in recent years.

Conference Indiana presents similar challenges in terms of school size; Columbus North and Southport are the only other 6A football schools in that league, and neither has been remotely close to the Trojans’ level of late in that sport. Travel would also be a concern with the two Terre Haute schools in the mix.

Knapp doesn’t rule out Center Grove eventually finding a landing spot somewhere, but for now he’s excited about exploring the possibilities that independence could open up.

“If you take football out of it, I think it’s very manageable across the board for the other 19 sports,” he said. “I look at it as a challenge that lets you maybe play some teams that you’ve never been able to play before but wanted to. … It’ll definitely let us be creative.”